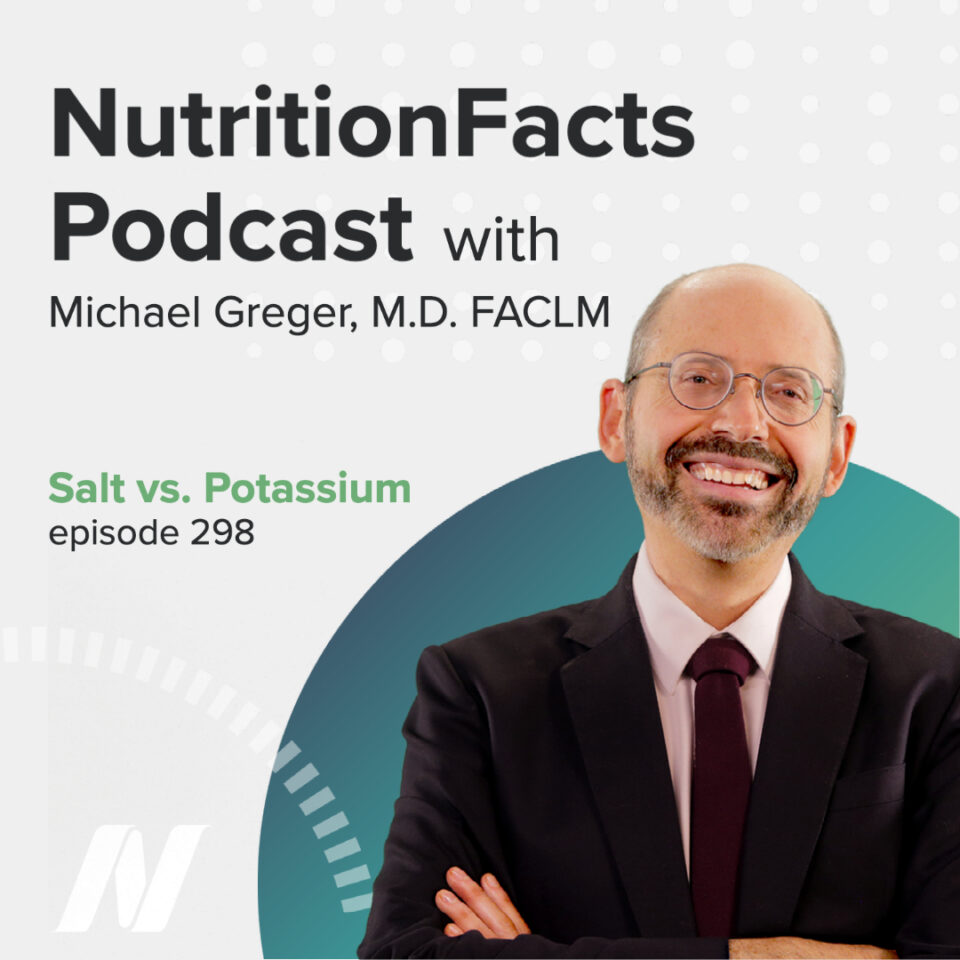 Too much salt in your diet? Not enough potassium? Welcome to the 99.99 percent club.

Today, we examine the need for less sodium and more potassium-rich foods.

Worldwide, physical inactivity accounted for more than 10 million years of healthy life lost, but what we eat accounts for nearly 20 times that. Unhealthy diets shave hundreds of millions of disability-free years off of people’s lives every year.
What are the worst aspects of our diets? Four out of the five of the deadliest dietary traps involve not eating enough of certain foods. Not eating enough whole grains, not eating enough fruits, not eating enough nuts and seeds, and not eating enough vegetables. But our most fatal flaw is too much salt. On the order of 15 times deadlier than diets too high in soda, for example, just to help put things in perspective. “There remains no single more effective public health action related to nutrition than the reduction of sodium in the diet.”
This is why national and international health organizations have called for warning labels on salt packets and salt shakers, with messages like “too much sodium in the diet causes high blood pressure and increases risk of stomach cancer, stroke, heart disease, and kidney disease. Limit your use.”
Salt also increases inflammation. For example, sodium intake is associated with increased disease activity in multiple sclerosis, an inflammatory autoimmune nerve condition––about three to four times the exacerbation rate in those with medium or high sodium intakes compared to those getting less than a teaspoon (less than 6 grams) of salt total in a day.
Just as you can see higher sodium levels in the tissues of those who suffer from lupus, another serious inflammatory autoimmune disease, you can correlate high sodium levels in the spinal cord of MS patients with the disease, and decreased structural integrity.
Where’s sodium found though? Really crappy foods. So, it’s hard to know if increased salt intake is just a marker for a bad diet overall. But what we do know is that salt and high blood pressure are cause-and-effect. How? Because we have more than a hundred randomized controlled trials demonstrating that if you cut down on added salt, your blood pressures fall, and the more you cut down the better. Part of the mechanism may actually be the damage salt may do to your microbiome, the friendly flora in your gut.
And no wonder. Our bodies evolved only to handle about 750mg a day. The American Heart Association says we should stay under at least twice that about, but we’re eating more than four times what’s natural. And it’s only getting worse, increasing over the last decade. Anyone care to guess what percentage of Americans exceed the 1,500mg upper limit recommendation? 98.8 percent. And that’s more than a decade ago!
The vast majority of U.S. adults consume too much sodium and, at the same time, too little potassium, a mineral that lowers blood pressure. Less than 2 percent of U.S. adults consumed the recommended daily minimum intake of potassium. So, more than 98 percent of Americans eat potassium deficient diets. This deﬁciency is even more striking when comparing our current intake with that of our ancestors, who consumed large amounts of dietary potassium. We evolved probably getting more than 10,000mg a day. The recommendation is to get around at least like around half that, yet most of us don’t come anywhere close.
Put the two guidelines together, and sodium and potassium goals are currently met by less than 0.015 percent of the U.S. population. So, we’re talkin’ close to 99.99 percent noncompliance. As in only 1 in 6,000 Americans even hits the recommended guidelines.
What about using potassium-based salt substitutes? Instead of using sodium chloride—salt, why not shake on some potassium chloride? Seems a little too good to be true. Same salty taste, but you’re reducing sodium while at the same time increasing your potassium intake? Is there a catch? Are potassium-based salt substitutes safe? Effective? We’ll find out, next.

Of all the terrible things about our diets, high dietary sodium intake, high salt intake, is the leading risk, estimated to be causing millions of deaths every year––killing millions mainly through adverse effects on blood pressure and increased risk of stroke, heart attack, and kidney damage. Hypertension—high blood pressure––is still called the “silent and invisible killer” because it rarely causes symptoms, but is one of the most powerful independent predictors of some of our leading causes of death.
We evolved consuming a diet very rich in potassium and low in sodium. But today, this pattern has been completely reversed. This flip reﬂects a shift from traditional plant-based diets high in potassium and low in sodium––a shift from fruits and greens, roots, and tubers to salty processed foods stripped of potassium, which is considered a “nutrient of public health concern” because 98 percent of the U.S. population doesn’t even reach the recommended minimum daily intake of potassium, as I mentioned in my last video. And, low potassium intake itself is implicated in high blood pressure and cardiovascular disease. Yet few physicians actually think about proposing their patients eat more foods that are high in potassium, like fruits and vegetables, to better control blood pressure––even though several meta-analyses have now conﬁrmed that high potassium intake appears to reduce the risk of stroke.
There’s even a reduction in stroke risk independent of blood pressure effects, consistent with other protective effects of potassium, such as reducing clot formation, reducing hardening of the arteries, reducing the generation of free radicals. Higher sodium intake is associated with a 20 percent increased risk of dying prematurely, where higher potassium intake was associated with a 20 percent reduced risk of dying prematurely. Yeah, but sodium is found in crappy processed foods, while potassium is concentrated in healthy foods like beans and greens. So, having low sodium intake and high potassium intake may just be a marker for a more healthful diet—more plant foods and less crap.
How do we know sodium is cause-and-effect bad? Because randomized controlled trials show sodium reduction leads to blood pressure reduction, just like there are randomized controlled trials showing that if you give people extra potassium, you can bring down blood pressures as well. So, what about using potassium chloride to salt your food, rather than sodium chloride? That’s what’s found in these zero sodium salt substitutes.
Potassium chloride is a naturally occurring mineral salt, which is obtained the same way we get regular sodium salt. Since we get too much sodium and not enough potassium, this would seem to make potassium chloride a win-win solution.
Now, whole healthy plant foods would be the best way to increase potassium intake. Fruits and vegetables have all sorts of other good things in them besides potassium, but we have 10 studies now, randomized controlled trials, showing that just swapping in some potassium chloride for regular salt can lead to significant reductions in blood pressure in people with hypertension––suggesting that salt substitutes may even help prevent hypertension as well. We know that salt substitutes can lower blood pressure, but does it actually decrease the incidence of hypertension, and more importantly, disease endpoints like stroke and mortality? You don’t know, until you put it to the test.
In a randomized controlled trial, households had their salt replaced with just a quarter potassium chloride. At that level, most people either can’t tell the difference, or even prefer the salt with the potassium mixed in. Okay, but did it actually do any good? The use of even the quarter salt substitute was associated with cutting the risk of developing hypertension in half.
Okay, but what about actually following people out to see if there’s any change in the risk of dying from cardiovascular disease? Five kitchens in a veterans’ retirement home were randomized into two groups for about two and a half years, salting meals with regular salt or, unbeknownst to the cooks and the diners, a 50/50 blend of potassium chloride. Those in the half-potassium group cut their risk of dying from cardiovascular disease by about 40 percent, and lived up to nearly a year longer. The life expectancy difference at age 70 was equivalent to that which would have naturally occurred in 14 years––meaning that just switching to half potassium salt appeared to effectively make people more than a decade younger when it came to risk of death. As we speak, there is a massive randomized controlled trial wrapping up in China, involving 600 villages and more than 20,000 people, that will give us an idea of just how low we can drop stroke risk with this strategy.
China is perfect, because up to 75 percent of their sodium intake comes from salt they add in the home kitchen or dining room, whereas most sodium in the American diet comes prepackaged in the meat and processed foods we buy––though certainly the food companies could switch over themselves. Why haven’t they? And why haven’t more people embraced these salt substitutes, if they work well and can taste just as good? We could be “Achieving the Beneﬁts of a High-Potassium Paleolithic Diet—Without the Toxicity.” So, “Is salt substitution ready for prime time or what?” What about safety? Yes, there are convincing arguments about the benefits, but what about the risks, like you know, the quote-unquote “inclusion of potentially fatal salt substitutes in the food supply.” Wait, what? We’ll talk about the potential downsides, next.