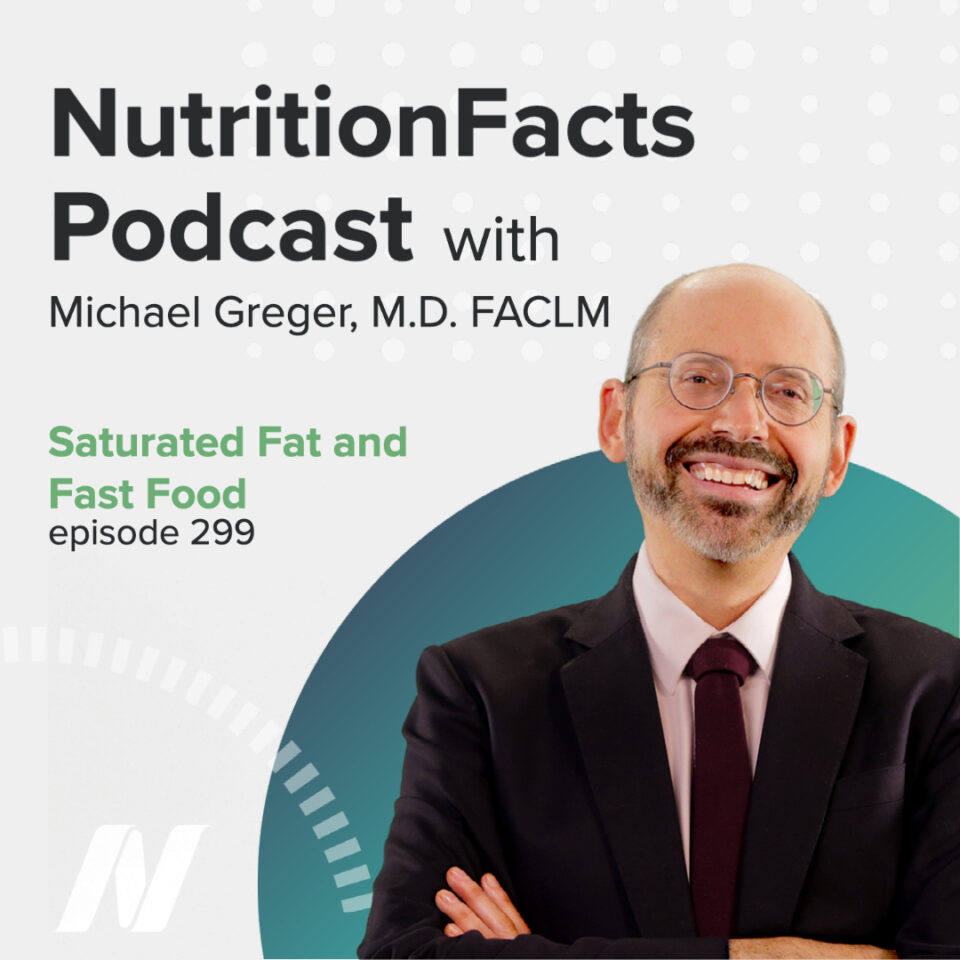 When you reach for that fatty, fried food, here is what actually happens inside your body.

Did you know that a single meal high in saturated fat can impair artery function for hours after consumption? Here’s our first story.

We are only as old as our arteries. What can we do to preserve artery function as we age? A poor diet and sedentary behavior can lead to adverse aging processes, like impairment of the little power plants in our cells, which can result in free radical formation—oxidative stress—and inflammation, which leads to the artery dysfunction that can end in the cardiovascular disease that ends us.
In a series of videos I did about a decade ago, I discussed this landmark research showing that a single high-fat meal could cripple artery function within hours of consumption, compared to no change in the low-fat meal. The high-fat meal that so crippled artery function included Sausage and Egg McMuffins from McDonalds. How do we know the sausage, egg, or cheese was to blame? What about the crappy carbs in the biscuits? Because the low-fat meal that didn’t impair artery function was a sugary mess of carby Frosted Flakes.
And just when your artery function finally starts to recover five or six hours later? Lunchtime! when your arteries may get whacked with another load of meat, eggs, dairy, or oil. Why does it matter so much what happens after a meal within your body? Because most of us spend about 16 hours a day in that after-a-meal state, constantly hammering our arteries. No wonder cardiovascular disease is our #1 killer.
And it doesn’t just inflame the arteries in our heart, but our lungs as well. “A high-fat challenge increases airway inﬂammation and impairs bronchodilator recovery in asthma.” Have asthmatics cough up sputum from their lungs four hours after the same kind of high-fat meal, and inflammatory cells shoot up in the high-fat meal group. In terms of lung function, give them two hits of their inhalers (containing a drug called albuterol or Ventolin) and their airways open up as they should—after the low-fat meal. But after the high-fat meal, the same inhaler doses don’t work as well, crapping out after a few hours because of all the extra inflammation in their lungs. What you eat can determine how well you breathe.
Okay, but that was asthmatics. But even in nonasthmatic subjects, you get that same spike in inflammatory cells in sputum coughed out of your lungs four hours after eating what was, in this case, a Jimmy Dean Meat Lovers Breakfast Bowl.
And there aren’t only more inflammatory cells; there is a doubling of the amount of pro-inflammatory oxidized LDL cholesterol sucked up by the type of white blood cells that go on to form foam cells. Those are the cells that build up the inflamed pus in your artery wall that leads to heart attacks. And all this happens within just hours of eating pizza, in this case.
The fat in your blood goes up, and so do your endotoxin levels. Endotoxins are the components of bacterial cell walls, and foods like meat can be so contaminated with bacteria—alive and dead—that they accumulate endotoxins. And we’re talking about both red meat and white meat.
But, recent research (published in 2020) suggests the main culprit may not be endotoxins after all, but the fat itself. The saturated fat floating in your blood after an unhealthy meal may be inducing the inflammation more directly. Either way, we are accountable for what we eat, meal-by-meal, for the modification of the risk factors for chronic metabolic disease.
In our next story, we look at the window of time in which sufficient physical activity can help mediate some of the damage caused by eating an unhealthy meal.

In my last video, I discussed studies that show a single meal high in saturated fat can impair artery function in men, as measured in the arm. But what we’re more concerned about is blood flow to the wall of the heart. Researchers randomized men to eat eithera high-fat meal that was more than 60 percent fat––half of it saturated, with more than an egg’s worth of cholesterol, or a low-fat meal that was mostly carbs––less than 10 percent fat and 50 times less cholesterol.
If a part of a coronary artery is blocked for any reason, the surrounding vessels expand. That extra expansion capacity is called the coronary ﬂow reserve, and it’s clamped down within hours of eating a fatty meal, undermining the heart’s ability to compensate for clogged arteries. That’s how a high-fat meal affects blood flow to the heart.
What happens if you exercise, though, right after that high-fat meal? After-the-meal inflammation, following the prolonged elevation of fat in the blood that occurs when you eat high-fat meals, provides a likely explanation for increased cardiovascular disease. But substantial evidence has shown that acute exercise is an effective modality for clearing out some of that fat after a meal. However, the benefits of acute exercise for postprandial lipemia, for after-the-meal fatty blood, appear to be relatively short-lived. Going a few days without exercising may completely negate any benefit, no matter how fit you are. The time window appears to be between 18 hours before the meal, up until around 90 minutes after the meal. And how much exercise do we need? About an hour of moderate-intensity exercise should do it.
In this study though, it only took 20 minutes of stair climbing, broken up into five minutes every hour for four hours, after a McDonald’s breakfast of hash browns, eggs, pancakes, muffins, sausage, and a milkshake. Following such a meal, artery function significantly decreased when the subjects just sat around after eating, but not when they did the hourly stair-climbing exercises. In conclusion, hourly exercise may attenuate the negative effects not only of prolonged sitting but also of high-fat meal intake, suggesting that stair-climbing should be incorporated as an easily accessible lifestyle strategy to protect artery function. Of course, it goes without saying that the other way you can protect artery-function is to not to eat breakfast at McDonald’s in the first place.
Such a meal would also have more than 2,000 mg of sodium, or more than the 1,500 the American Heart Association recommends you stay under for an entire day. Give someone a meal with even less salt—a third less, and that alone can still impair artery function within an hour of consumption, even independent of the increase in blood pressure.
When it comes to blood pressure, some people are “salt-sensitive,” meaning they suffer a large bump in blood pressure when they eat salt. But others are said to be “salt-resistant.” Their blood pressure doesn’t really depend much on their salt intake. So, for these people is salt okay? No. High dietary sodium intake reduces artery function, regardless of whether your blood pressure is salt-sensitive or salt-resistant. Your artery function is impaired either way, going from a low-salt diet to a high-salt diet. See, there’s an influence of dietary salt beyond blood pressure.
In spite of the seemingly unanimous consensus, some researchers (too often funded by the salt industry) claim that it’s actually not good to cut down on salt, but the evidence is against these dissenters. Like the saturated fat in meat, dairy, and junk, the science indicates that sodium, not sodium reduction, is the real villain.
Finally today – If you’re going to eat something unhealthy, is there anything you can pair it with to help mediate the damage it may cause?

Alzheimer’s Disease and How Not to Get It