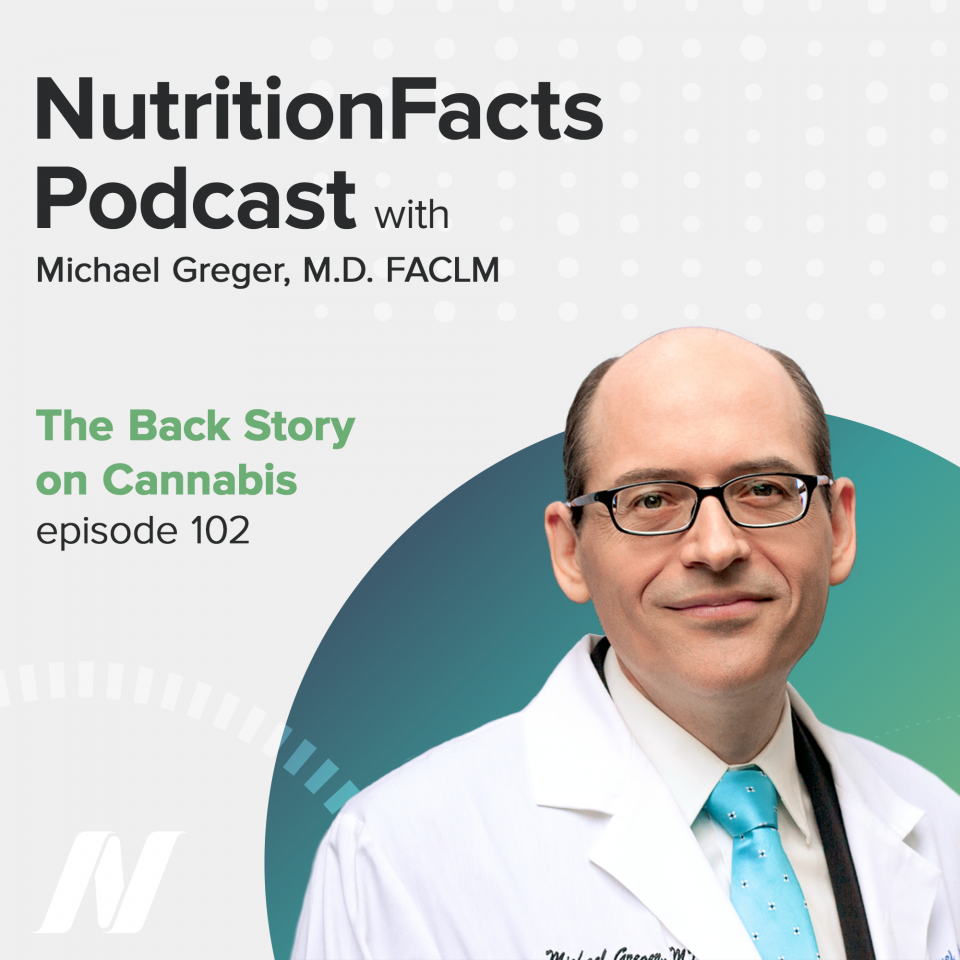 What are the long-term health consequences of smoking cannabis?

This episode features audio from Effects of Smoking Marijuana on the Lungs, Smoking Marijuana vs. Using a Cannabis Vaporizer, and Will Cannabis Turn into Big Tobacco?. Visit the video pages for all sources and doctor’s notes related to this podcast.

Welcome to the Nutrition Facts podcast.  I’m your host Dr. Michael Greger.  I am thrilled that you have decided to join me today.  Because the more I learn about latest nutrition research – the more convinced I am that this information can make a real difference in all of our lives.  And I like nothing better – than sharing it with you.

I’ve been looking into the research on cannabis lately – and there is a lot of it out there.  In our first story – we examine the evidence that regular cannabis smoking causes acute lung inflammation, but what are the long-term consequences?

Indeed, we’ve known for 30 years that smoking three or four joints is the equivalent of smoking a pack a day of cigarettes, in terms of bronchitis symptoms and acute lung damage. How is that possible? Well, it may be the way they’re smoked. Pot smokers inhale more deeply, and then hold the smoke in four times longer, resulting in more tar deposition in the lungs. And, joints are more “loosely packed [and] unfiltered,” resulting in both “hotter smoke” and smokier smoke. So, even though in many ways smoke is smoke, the different “method of smoking” may explain how a few joints a day appear to cause as much inflammation as an entire pack a day of cigarettes.

About 30 to 40% of regular cannabis users suffer from cough, excess sputum, wheezing, and shortness of breath. A thousand young adults were followed for years, and in those who kept smoking, their respiratory symptoms got worse, or remained the same. But, those that quit tended to get better.

If we don’t quit, what are the long-term lung consequences? What about COPD (Chronic Obstructive Pulmonary Diseases), like emphysema? Even if smoking a single joint compromises lung function as much as up to five cigarettes, you’re still smoking 15 times less overall, and so, should end up with less long-term lung damage, right? That is, indeed, what’s been found.

Even long-term pot smokers don’t appear to suffer lasting lung damage. Follow people for 20 years, and an occasional joint appears to have no discernible effect on long-term lung function, though there may be some “accelerated decline” in function among those smoking joints every day for decades, and so marijuana “moderation” is suggested.

Cannabis vapor has less tar, but may contain more ammonia. What happens to respiratory symptoms when regular users of joints, blunts, pipes, and bongs switch to a vaporizer?

There are many ways people inhale marijuana. Most people either smoke it in a bowl, pipe, joint, or bong. This is concerning, since in some ways smoke is smoke, and using a bong doesn’t help in terms of the tar exposure. Where there’s fire, there’s smoke, and where there’s smoke, there’s inflammatory irritants. In fact, the “regular smoking” of cannabis is “associated with [the kind of] airway inflammation [you see] in the lungs of [cigarette] smokers,” which can result in prolonged respiratory symptoms, such as chronic coughing, excess sputum production, wheezing, and shortness of breath, as well as an “increased incidence of” bronchitis and other respiratory infections.

In many ways, smoke is smoke, whether it’s from burning plants in a forest fire, or burning plants in a joint or cigarette. There are harmful byproducts of combustion—any combustion—like carbon monoxide. In fact, you get five times more carbon monoxide per puff in cannabis than tobacco, since pot smokers inhale more deeply and then hold the smoke in.  Now, you can avoid that completely by eating cannabis instead, but the “slow, erratic [drug] absorption” doesn’t give the same kind of immediate high. Inhaling cannabis vapor, however, could potentially offer the best of both worlds, giving the same kind of high in terms of subjective ratings compared to smoking it, but with significantly less carbon monoxide exposure. So, “similar effects” with fewer “toxic by-products,” though not necessarily all “toxic by-products.”

Both cannabis smoke and just vapor can evidently “contain high concentrations of ammonia,” and sometimes vapor can be even worse. So, yeah, vapor has less tar, but may have more ammonia. This was with a direct heat vaporizer, the so-called “Blue Meanie.” Using a hot-air vaporizer, like the Volcano brand, results in ammonia levels in your bloodstream more comparable to smoking it. But, the only reason we care about contaminants is that we’re trying to cut down on the inflammation. Does cannabis vapor produce fewer respiratory symptoms than smoke?

According to this study, the first of its kind, yes. Now, vaporizing doesn’t help with dependence issues, or impaired driving, or brain damage among heavy adolescent users, but may improve cannabis drug safety by minimizing lung troubles. They conclude that “[r]egular users of joints, blunts, pipes, and water pipes might decrease respiratory symptoms by switching to a vaporizer.” But, this was just based on a snapshot-in-time internet survey asking people about their symptoms. You don’t know for sure until you…put it to the test.

But, wait a second, eight out of 20—40%—got a respiratory illness within just a single month? That doesn’t sound good. And, indeed, it’s something they noted. Additionally, the “self-reported” improvements may have been tinged with bias, as smokers might think such results might be good for the cause. This may have backfired though, as there are calls in the medical literature to just legalize smokeless forms, or at least set it up so that “smoked marijuana” is more heavily taxed or something.

In our final story, we discover how there are some serious public health concerns about the legalization of marijuana, but they are probably not what you might expect.

Opinions on marijuana legalization range from regarding it as “a landmark human rights advance… to one of a disastrous, anarchic profiteering sham.” Most may agree, though, that the trillion dollar war on weed has been a failed policy, “a vehicle for the hideous expression of [our] racism,” diverting law enforcement resources away from violent crime and yet having “no appreciable effect” on marijuana availability. Yes, legalization might free up law enforcement, but opponents argue that legalization may increase marijuana use among the youth—not because they couldn’t get it before, but because it will be cheaper and more acceptable. In other words, the argument goes: think about the children.

So, what happened in states like Washington and Colorado after they legalized marijuana? Among teens in Washington state, “perceived harmfulness” indeed went down, and marijuana use went up, doubling from 2 to 4%. In contrast, no change in Colorado, but presumably that’s because they had five years of commercialized medical marijuana before recreational use became legal. And, indeed, with the original liberalization in Colorado, perceptions of risk among teens dropped more than elsewhere, and rates of dependence went up.

“A frequently cited concern with legalization is that it will allow the rise of Big Cannabis, similar to Big Tobacco and Big Alcohol.” After the cannabis industry successfully beat back pesticide regulations in Colorado, public health advocates experienced a feeling of déjà vu trying “to mitigate [the] adverse public health consequences” in the face of an industry that just “aims to maximise profit.”

The biggest concern, though, may not be Big Cannabis turning into Big Tobacco, but rather Big Tobacco turning into Big Cannabis. “Marijuana legalization advocates [may] not have considered the potential effects of the multinational tobacco companies entering the market.” Internal memos show that Big Tobacco has just been waiting in the wings for the right time to strike. The fact that they created perhaps the leading cause of preventable death in the world shows how much they care about people compared to profits; so, that should raise some red flags.

Big Tobacco is expected to profit from legalization whether or not it takes over, though, as frequent cannabis use is a predictor of future cigarette addiction. For teen non-smokers, “weekly cannabis use…predicted a more than eightfold increase” in the odds of moving from just joints to cigarettes. This may be because “[t]obacco is [commonly] mixed with cannabis” to help it burn more smoothly. “Thus, cannabis use may indirectly [expose one] to tobacco,” which may be seven or eight times more addictive than cannabis.

Or, it may just be that teens who smoke marijuana are hanging out more with a crowd that tends to smoke more cigarettes, and that’s the reason.  Though, even after “controlling for peer use,” cannabis does still seem to be a gateway drug to tobacco—perhaps as a way to deal with cannabis withdrawal. Either way, one of the most potentially harmful effects of cannabis use is that it may lead to nicotine addiction, which wipes out nearly five million lives every year, about 24 times more than all illegal drugs combined.

We would love it if you could share with us your stories about reinventing your health through evidence-based nutrition.  Go to nutrition facts.org forward slash testimonials. We may share it on our social media to help inspire others.

To see any graphs charts, graphics, images or studies mentioned here, please go to the Nutrition Facts podcast landing page.  There you’ll find all the detailed information you need – plus links to all of the sources we cite for each of these topics.

Be sure to check out my new “How Not to Die Cookbook.”  It’s beautifully designed, with more than 100 recipes for delicious and nutritious, life-saving, plant-based meals, snacks, and beverages.  All proceeds I receive from the sales of all my books goes to charity.

Everything on the website is free. There’s no ads, no corporate sponsorship.  It’s strictly non-commercial.  I’m not selling anything. I just put it up as a public service, as a labor of love – as a tribute to my grandmother – whose own life was saved with evidence based nutrition.

This is just an approximation of the audio content, contributed by Becky Boyle.

New Research on the Optimal Diet