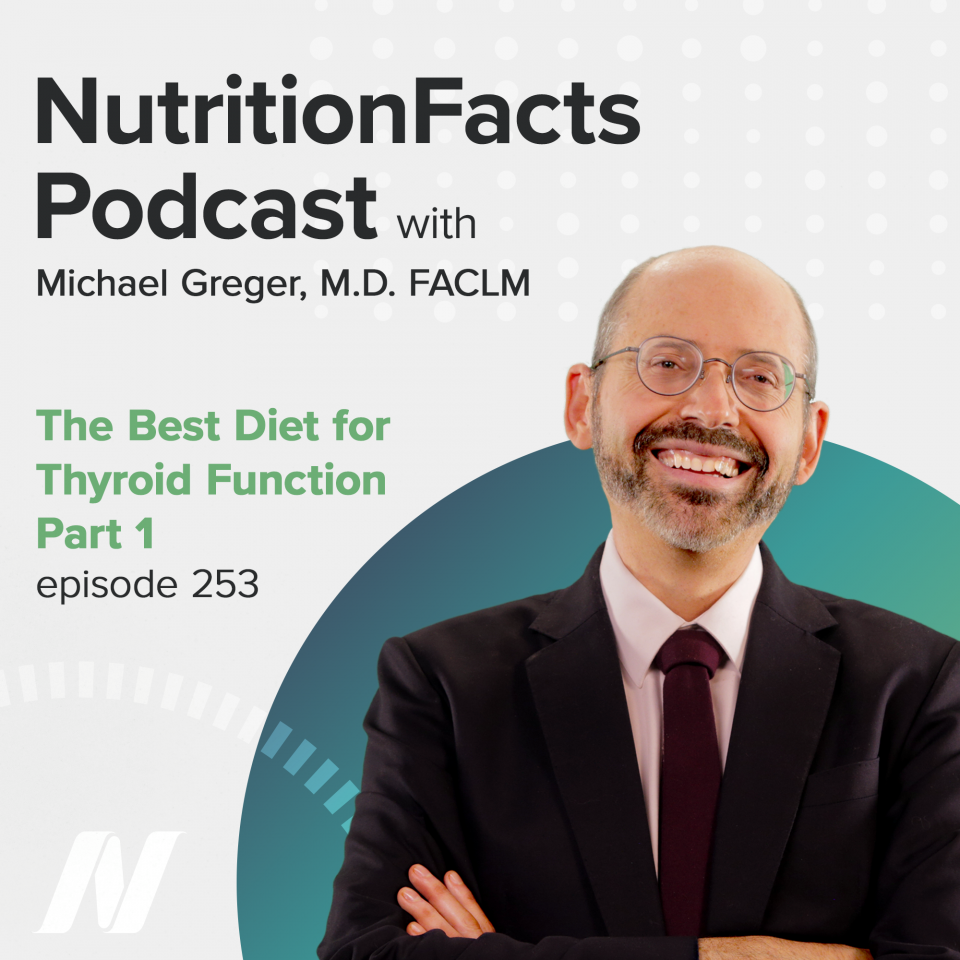 How to take care of one of our most important organs — our thyroid. This episode features audio from Are Vegans at Risk for Iodine Deficiency? and The Healthiest Natural Source of Iodine. Visit the video pages for all sources and doctor’s notes related to this podcast.

It’s crazy when you think about all of the different kinds of foods we eat.  We just swallow – and hope it all works out for the best. Well – as it turns out there are better ways to think about keeping our bodies humming healthfully along. Welcome to Nutrition Facts – I’m your host Dr. Michael Greger.

Did you know that the mighty thyroid controls your metabolism, produces hormones, and regulates your body temperature?  You might ask – WHAT DOESN’T IT DO?

Let’s start with a story about plant-based milk – and iodine.

Adequate dietary iodine is required for normal thyroid function. In fact, the two thyroid hormones are named after how many iodine atoms they contain: T3 and T4. Given that iodine is extensively stored in the thyroid gland itself, it’s not something you have to get every day, but your overall diet needs to have some good source. Unfortunately, the common sources aren’t particularly health-promoting: iodized salt and dairy foods (because iodine-based cleansers like betadine are used to sanitize the udders, which results in some iodine leaching into the milk). They also add iodine to cattle feed, and some commercial breads have iodine-containing food additives.

So, if you put people on a paleo-type diet, and cut out dairy and table salt, they can develop an iodine deficiency, even though they double their seafood intake, which can also be a source. What about those switching to diets centered around whole plant foods? They’re also cutting down on ice cream and Wonder Bread, and if they’re not eating anything from the sea––seaweed, sea vegetables—they can run into the same problem.

Her parents reported striving to feed her only the healthiest foods. The three-year-old only got plant-based, unsalted, unprocessed foods with no vitamin supplementation. Now, that could have been deadly. With no vitamin B12, those on strictly plant-based diets can develop irreversible nerve damage, but in this case, a goiter arose first due to inadequate iodine intake.

Here’s another case of “veganism as a cause of iodine deficient hypothyroidism” in a toddler after weaning. Before weaning, he was fine, because his mother kept taking her prenatal vitamins, which luckily contained iodine.

Most vegetarians and vegans are apparently unaware of the importance of iodine in pregnancy, just as clueless as their omnivorous counterparts. The American Thyroid Association and the American Academy of Pediatrics have recommended that women even just planning on getting pregnant should ingest a daily supplement that contains 150 micrograms (mcg) of iodine, yet only 60 percent of prenatal vitamins marketed in the U.S. contain this essential mineral. So, in spite of the recommendations, about 40 percent lack it. Therefore, it is extremely important that pregnant and breastfeeding women read the labels to ensure that they are receiving an adequate amount.

Women of reproductive age have an average iodine level of 110 mcg/liter, which is fine for nonpregnant individuals, but we’d really like to see at least 150 mcg/liter in pregnancy. (It’s basically a 24-hour urine test, in which iodine sufficiency is defined as 100 mcg/liter of pee in nonpregnant adults, which your average vegan fails to reach in the largest study done to date, out of Boston.)

The recommended average daily intake is 150 mcg/day for most people, which you can get in like a cup and a half of cow’s milk. Sadly, plant-based milks are typically not fortified with iodine, averaging only about 3 mcg/cup. In the largest systematic study to date, although many plant-based milks are fortiﬁed with calcium, they only found just three of 47 fortiﬁed with iodine. Those that were had as much as cow’s milk, but those that weren’t fell short.

Plant-based milk companies brag about enriching their milks with calcium, and often vitamin B12, vitamin D, and vitamin A, but only rarely are attempts made to match the iodine content. The only reason cow’s milk has so much is that they enrich the feed, or it comes dripping off the udders. So, why don’t plant-milk companies add iodine, too? I was told by a food scientist at Silk that my carrageenan video played a role in them switching to another thickener. Hopefully, they’ll see this video and consider adding iodine too, or some company will snatch at the market advantage opportunity.

The researchers conclude that individuals who consume plant-based milks not fortified with iodine may be at risk for iodine deﬁciency, unless they consume alternative dietary iodine sources, the healthiest of which is sea vegetables––which we’ll cover next.

Dairy milk supplies between a quarter and a half of the daily iodine requirement in the United States, though milk itself has little native iodine. The milk iodine content is mainly determined by factors like the application of iodine-containing teat disinfectants. The iodine residues in milk appear to originate mainly from the contamination of the teat surface. The teats are sprayed or dipped with betadine-type disinfectants, and the iodine just kind of leaches into the milk.

Too bad most of the plant-based milks on the market aren’t enriched with iodine, too. Fortified soy milk is probably the healthiest of the plant milks, but even if it was enriched with iodine, what about the effects of soy on thyroid function? It’s funny that when I searched the medical literature on soy and thyroid, this study popped up. A cost-effective way to train residents to do thyroid biopsies. Just stick the ultrasound probe right on top and go to town. It turns out that on ultrasound your thyroid gland looks a lot like tofu.

Anyways, the idea that soy may inﬂuence thyroid function originated over eight decades ago when marked thyroid enlargement was seen in rats fed raw soybeans, though the observation that people living in Asian countries have consumed soy foods for centuries with no perceptible thyrotoxic effects certainly suggests their safety. The bottom line is there does not seem to be a problem with people who have normal thyroid function. However, soy foods may inhibit the oral absorption of Synthroid, thyroid hormone replacement drugs, but so do all foods. That’s why we tell patients to take it on an empty stomach. But you also have to be getting enough iodine; so, it may be particularly important for soy food consumers to make sure their intake of iodine is adequate.

What’s the best way to get iodine? For those who use table salt, make sure it’s iodized. Currently, only half of table salt sold contains iodine, and the salt used in processed foods is typically not iodized. Of course, ideally, we shouldn’t add any salt at all. Dietary salt is a public health hazard. Think this title is a little over the top? Dietary salt is the #1 dietary risk factor for death on the planet Earth, wiping out more than three million people a year—twice as bad as not eating your vegetables.

What’s the best source of iodine, then? Sea vegetables! You can get a little iodine here and there from a whole variety of foods, but the most concentrated source by far, with up to nearly 2,000 percent of your daily allowance in just a single gram (which is like the weight of a paperclip) of seaweed.

Given that iodine is extensively stored in the thyroid, it can be safely consumed intermittently, meaning you don’t have to get it every day, which makes seaweed use in a range of foods attractive, and occasional seaweed intake enough to ensure iodine sufficiency. However, some seaweed should be used with caution due to its overly high iodine content, like kelp. Too much iodine can cause hyperthyroidism, a hyperactive thyroid gland. A woman presented with a racing heartbeat, insomnia, anxiety, and weight loss thanks to taking just two tablets a day containing kelp.

The recommended average daily intake is 150 mcg/day for non-pregnant, non-breastfeeding adults, and we may want to stay below 600 mcg/day on a day-to-day basis, whereas a tablespoon of kelp may contain 2,000 mcg. I’d stay away from kelp because it has too much, and stay away from hijiki because it contains too much arsenic. Here’s how much of common seaweed preparations should give you an approximate daily allowance: two nori sheets, which you can literally just nibble on them as snacks like I do; one teaspoon of dulse flakes, which you can just sprinkle on anything; one teaspoon of dried arame, which is great to add to soups; or one tablespoon of seaweed salad.

If iodine is concentrated in marine foods, this raises the question of how early hominins living in continental areas could have met their iodine requirements. Here’s what bonobos do, perhaps our closest relatives. During swamp visits, they all forage aquatic herbs.