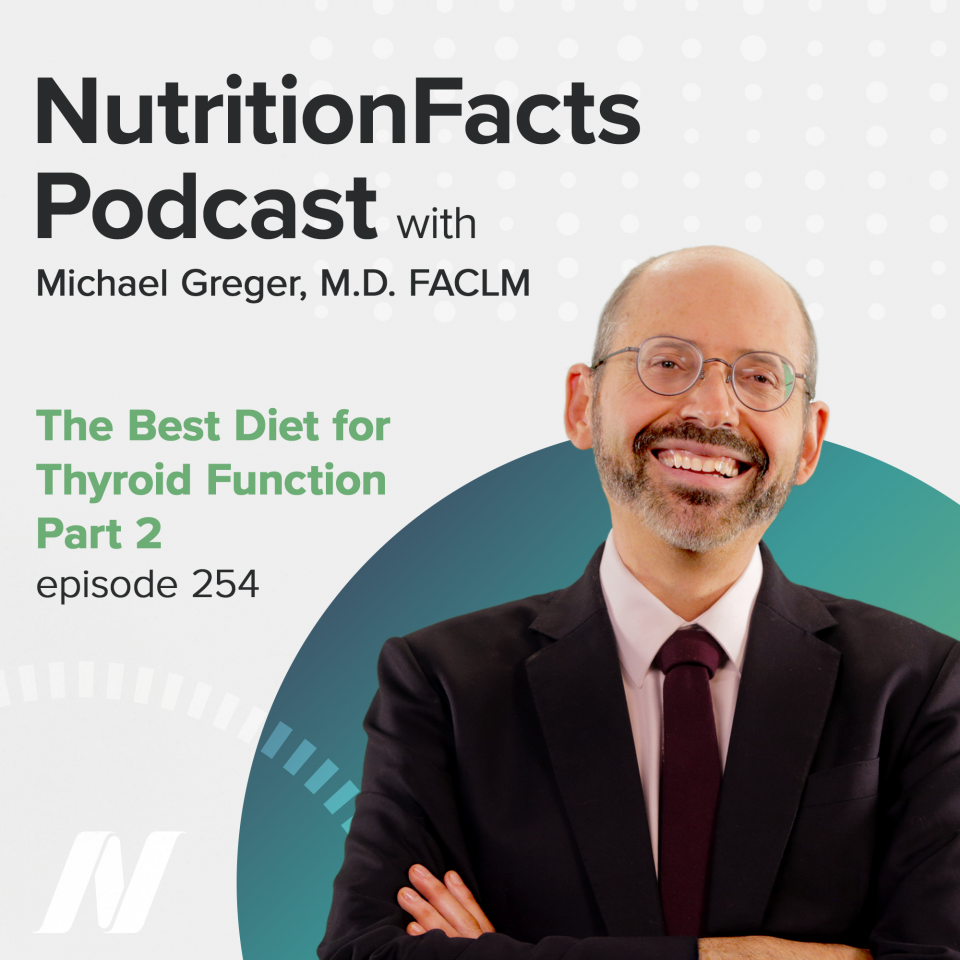 It’s crazy when you think about all of the different kinds of foods we eat.  We just swallow – and hope it all works out for the best. Well – as it turns out there are better ways to think about keeping our bodies humming healthfully along.  Welcome to Nutrition Facts – I’m your host Dr. Michael Greger.

Today – we’ve got more from our series on the best diet for thyroid function – starting with research on plant-based foods and thyroid health.

There are several autoimmune diseases that affect the thyroid gland, the most common being Graves’ disease and Hashimoto’s thyroiditis. Graves’ disease results in hyperthyroidism, an overactive thyroid gland. Though slaughterhouses are supposed to remove thyroid glands, should some neck meat slip in, you can suffer a similar syndrome, called hamburger thyrotoxicosis. But that’s not from your body making too much thyroid hormone, but your body eating too much thyroid hormone. Graves’ disease is much more common, and meat-free diets may be able to help with both, as plant-based diets may be associated with a low prevalence of autoimmune disease in general––as observed, for example, in rural sub-Saharan Africa. Maybe it’s because plants are packed with antioxidants, which are possible protective factors against autoimmune diseases. Maybe it’s because plants are packed with anti-inflammatory compounds. After all, a whole food plant-based diet is basically synonymous with an anti-inflammatory diet. But you don’t know, until you put it to the test.

This apparent protection may be due to the exclusion of animal foods, the benefits of plant foods, or both. Animal foods––like meat, eggs, and dairy products––may contain high estrogen concentrations, for example, which have been linked to autoimmunity in preclinical studies. Or, the decrease in animal protein may downregulate IGF-1, which is not just a cancer-promoting growth hormone, but may play a role in autoimmune diseases as well. Or, it could be the good stuff in plants that may protect cells––like the polyphenol phytochemicals, such as ﬂavonoids found in plant foods. Maybe it’s the environmental toxins that build up in the food chain. For example, fish contaminated with industrial pollutants, like PCBs, are associated with an increased frequency of thyroid disorders.

Okay, but what about the other autoimmune thyroid disease, Hashimoto’s thyroiditis, which, assuming you’re getting enough iodine, is the primary cause of hypothyroidism, an underactive thyroid gland. Graves’ disease wasn’t the only autoimmune disorder that was rare or virtually unknown among those living in rural sub-Saharan Africa eating near-vegan diets. They also appeared to have less Hashimoto’s.

There is evidence that those with Hashimoto’s have compromised antioxidant status, but we don’t know if it’s cause or effect. But, if you look at the dietary factors associated with blood levels of autoimmune anti-thyroid antibodies, animal fats seem to be associated with higher levels, whereas vegetables and other plant foods are associated with lower levels. So again, anti-inflammatory diets may be useful. It’s no surprise, as Hashimoto’s is an inflammatory disease—that’s what thyroiditis means: inflammation of the thyroid gland.

Another possibility is the reduction in methionine intake, an amino acid concentrated in animal protein––thought to be one reason why the consumption of whole plant foods is likely to have a favorable influence on longevity, through decreasing the risk of cancer, heart disease, and diabetes. And, methionine restriction improves thyroid function in mice, but it has yet to be put to the test for Hashimoto’s in humans.

If you compare the poop of patients with Hashimoto’s to controls, the condition appears to be related to a clear reduction in the concentration of Prevotella species. Prevotella are good fiber-eating bugs known to enhance anti-inflammatory activities. Decreased Prevotella levels are also something you see in other autoimmune conditions, such as multiple sclerosis and type 1 diabetes. How do you get more Prevotella? Eat more plants. But, put a vegetarian on a diet of meat, eggs, and dairy, and within as few as four days, you can drive down levels. So, one would expect those eating plant-based diets to have less Hashimoto’s, but I expressed concern about insufficient iodine intake, which could also lead to hypothyroidism. So, which is it? Let’s find out.

Vegan diets tended to be associated with lower, not higher, risk of hypothyroid disease. Why the word “tended”? Because the associated protection against hypothyroidism incidence and prevalence studies did not reach statistical significance. It wasn’t just they were slimmer. The lower risk existed even after controlling for body weight; so, they think maybe it’s because animal products may induce inflammation. The question I have is: If you have someone who already has Hashimoto’s, what happens if you change their diet? That’s exactly what I’ll explore next.

Finally today – we look at the results of a randomized, double-blind, placebo-controlled trial of a half teaspoon of powdered black cumin a day in Hashimoto’s patients.

Autoimmune thyroiditis, also known as Hashimoto’s disease, is an organ-speciﬁc autoimmune disorder where your body attacks your own thyroid gland, often leading to hypothyroidism due to destruction and scarring of the gland itself. We know there’s a genetic component, since identical twins are more likely to share the disease than fraternal twins. However, even with identical twins, the concordance rate was only about 50 percent––meaning even if your identical twin with basically the exact same DNA as you has the disease, there’s only like a flip of a coin’s chance you’ll get it, emphasizing that important factors other than your genes play a role in the development of the disease. Genes load the gun, but environment may pull the trigger.

More than 90 chemicals have been noted disrupting hormonal balance or thyroid function; however, only a few such pollutants show evidence that they contribute to autoimmune thyroid disease. These include polyaromatic hydrocarbons, which smokers get a lot from their cigarettes, but in nonsmokers, exposure comes almost entirely from food. Polycyclic aromatic hydrocarbons are primarily formed when muscle meats, such as beef, pork, fish, or chicken, are cooked by high temperature methods, such as grilling. PBBs are a type of flame-retardant chemical no longer manufactured in the U.S., but still found in the aquatic food chain. PCBs are used in a number of industrial processes and end up in people’s bodies largely through the consumption of fish as well, but also other meat and eggs.

So, one might suspect those eating plant-based diets would have lower rates of hypothyroidism, and indeed, despite their lower iodine intake, vegan diets tended to be protective. But they’ve never been put to the test in an interventional trial. A modification of the Paleolithic diet has been tried in Hashimoto’s patients, but didn’t appear to improve thyroid function.

What did, though, was Nigella Sativa. That name should sound familiar to anyone who’s read my latest book How Not to Diet, or watched my latest live presentation Evidence-Based Weight Loss. Nigella Sativa is the sciency name for black cumin, which is just a simple spice, but it is also used for a variety of medicinal purposes.

In this study, a randomized, double-blind placebo-controlled trial of eight weeks of a half teaspoon of powdered black cumin a day in Hashimoto’s patients. Not only was there a signiﬁcant reduction in body weight, which is why I profiled it in my book, it also signiﬁcantly reduced thyroid stimulating hormone, a sign that thyroid function was improving. It even lowered the level of autoimmune anti-thyroid antibodies, as well as increasing blood levels of thyroid hormone T3 in these Hashimoto’s patients. In addition, there was a significant drop in Interleukin 23, a proinflammatory cell signal thought to help promote the autoimmune inﬂammation of the thyroid, so further conﬁrming the anti-inﬂammatory nature of the plant. And what were the side effects? A 17 percent drop in LDL bad cholesterol.

Given the fact that patients with Hashimoto’s may be at particularly high risk of developing heart disease, this is exactly the kind of side effect we’d want. “Considering these health-promoting effects of black cumin, it can be considered as a therapeutic approach in management of Hashimoto-related metabolic abnormalities.”

A similar trial failed to find a benefit, though. Same dose, same time frame, but no significant changes in thyroid function. In contrast with the last study, though, they were not all Hashimoto’s patients, but rather hypothyroid for any reason, and that may have diluted the results. And it’s possible that telling patients to take the black cumin doses with their thyroid hormone replacement therapy may have interfered with its absorption, similar to other foods and drugs––which is why patients are normally told to take it on an empty stomach. Since there are no downsides—it’s just a simple spice—I figure, why not give it a try? The worst that can happen is you’ll have tastier food.

We would love it if you could share with us your stories about reinventing your health through evidence-based nutrition. Go to NutritionFacts.org slash testimonials. We may share it on our social media to help inspire others.