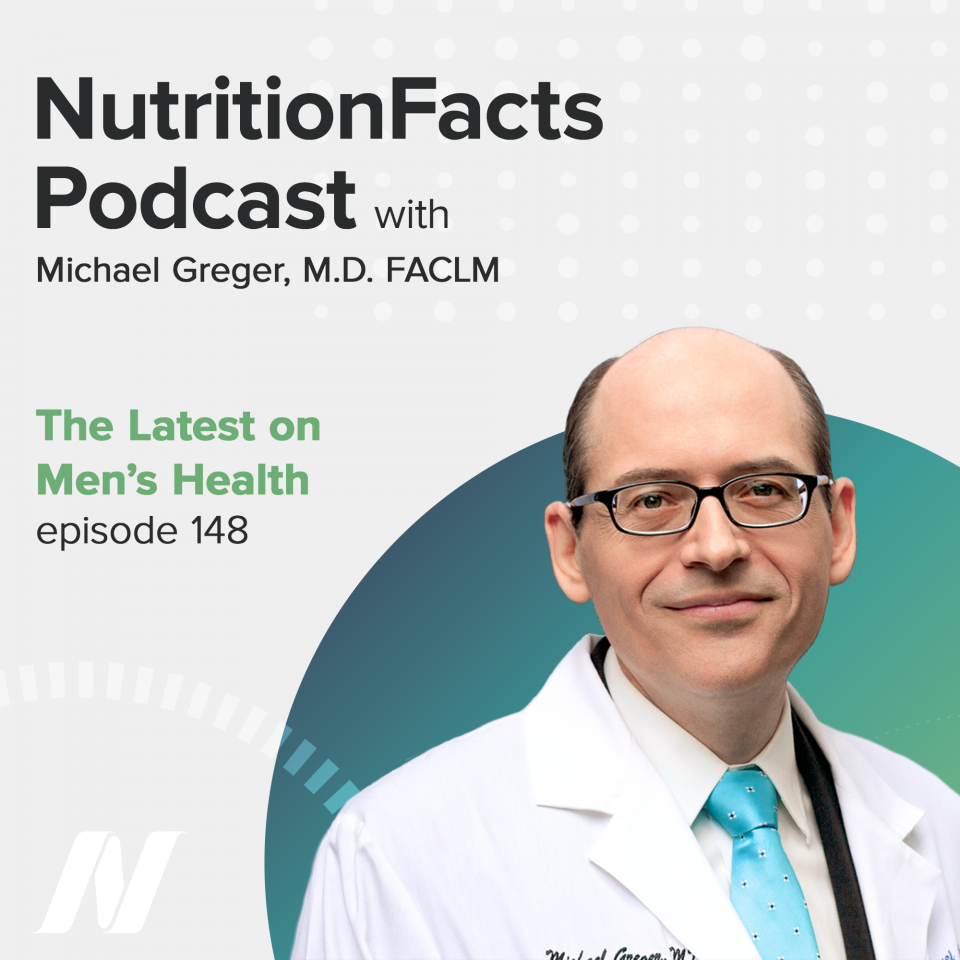 Today we zero in on the best diet for a problematic prostate.

This episode features audio from Xenoestrogens & Sperm Counts, Pomegranate vs. Placebo for Prostate Cancer, and Changing a Man’s Diet After a Prostate Cancer Diagnosis. Visit the video pages for all sources and doctor’s notes related to this podcast.

Today we take a close look at the latest fact-based research about men’s health. First up, we look at some different ways for men with a prostate cancer diagnosis to change their attitude towards diet

A cancer diagnosis is seen as a teachable moment in medicine where we can try to get people to eat healthier, but research suggests that male cancer patients in particular may be reluctant to introduce dietary modification. This has been attributed to dietary changes often being viewed as mimicking “feminine” eating behaviors, such as emphasizing an increase in fruit and vegetables.

Although healthy eating might enhance long-term survival, few men with prostate cancer make diet changes to advance their well-being. Many of the cancer survival trials for example require adherence to strict, plant-based diets, and though researchers tried providing extensive nutrition education and counseling programs, dietary adherence was still a challenge.

The way Dean Ornish was apparently able to reverse the progression of prostate cancer with a plant-based diet was home delivering prepared meals to their door, figuring men are so lazy they’ll just eat whatever’s put in front of them.  After all, male culture tends to encourage men to go for convenience food and meat, and drink beer.

Take Men’s Health magazine, for example. Included in the list of things men should never apologize for: liking McDonald’s, not offering a vegetarian alternative, and laughing at people who eat trail mix.

It features articles with titles like, “Vegetables Are for Girls,” and sections like “Men and Meat: There’s Only One Kind of Flesh We Like Better, and Even Then, She’d Better Know How to Grill!”

To appeal to male sensibilities, doctors are advised to use ‘body as machine’ metaphors, framing men’s health in terms of mechanical objects, such as cars, requiring tuning. But if men are so concerned about their masculinity and manhood, maybe we should instead share a bit about what prostate cancer treatment entails. The prostate is situated at the base of the penis, and so when you core it out with a radical prostatectomy, you lose about an inch off your penis, if it gets erect at all. Only 16% of men undergoing the procedure will regain their pre-surgery level of erectile functioning.

Patients are typically quoted erectile dysfunction rates around 60% or 70%, but studies have generally considered erectile function recovery as just the ability to maintain an erection hard enough for penetration about 50% of the time; so, getting it up occasionally is considered recovery, you know but, when a surgeon tells a patient he will recover function, the patients probably assume that means the kind of function they had prior to surgery  And that only happens 16% of the time,  and only 4% of the time in men over 60. Only 1 in 25 gets their baseline sexual function back.

And it’s not just erections, but other problems like orgasm-associated pain even years later and urinary incontinence during foreplay, stimulation, or orgasm. The vast majority of couples overestimate how much function they’re going to recover. Couples reported feeling loss and grief. Having cancer is bad enough without the additional losses. You’d think that would be enough to motivate men to improve their diets, but almost a fourth of the men newly diagnosed with prostate cancer state that they would prefer to have their lives cut short rather than living with a diet that prohibits beef and pork. More men would rather be impotent than improve their diet. It appears pleasures of the flesh may sometimes even trump pleasures of the flesh.

In our next story we learn what happened when pomegranate juice for prostate cancer was put to the test in a clinical trial.

The pomegranate has been revered through the ages for its medicinal properties. So much so, it’s been used as a symbol for some medical organizations. A fruit seems to be a better representation of health than a snake on a stick.

Supposedly beneficial for a wide range of diseases. Even the cannibals love it, improving the color of “kid meat.” No, they’re talking about baby goats. It just gave me a bit of a double-take when I saw this study.

Most of the attention over the last decade has focused on pomegranates and prostate cancer. Starting with in vitro studies, showing more and more pomegranate extract can suppress the growth of prostate cancer cells in a petri dish by up to 95%.

Primary management of prostate cancer consists of either radical surgery, or radiation. Despite this, a significant number of patients relapse, and ultimately develop metastatic disease. Even after a radical prostatectomy, in about a third of the patients, the cancer comes back, as evidenced by rising PSA levels. At that point, the treatment options are limited.  You already took out the prostate. The next step is essentially chemical castration; hormonal ablation. Just like breast cancer can thrive on estrogen, prostate cancer can thrive on testosterone. So, you can try to wipe out testosterone, but that can have such negative side effects. Anything we can do to delay that would be good.

So, what about plants? They note that men in Asia have the lowest prostate cancer rates in the world: up to ten times less than North America. Now, is this just a genetic thing? No. When Japanese individuals move to the United States and start eating and living like us, their breast and prostate cancer rates shoot up right towards ours. This could be because of what they’re eating more of here. Animal products are the strongest risk factor for prostate cancer worldwide, on a country by country basis.

Or, because of what they’re eating less of; their traditional low-fat, high-fiber diets, with soy products, and green tea, and plant-rich in general. So, did these researchers try sticking these cancer patients on a plant-based diet? No. They just had them drink a cup of pomegranate juice every day. Why? Because the study was funded by the pomegranate juice folks. At least they were allowed to take it by mouth.

So, what happened? Well, in the three years leading up to the study, their cancer was steadily growing, as measured by their average PSA levels going up. Then, once they started the juice, their tumors continued to grow, but it looks like they were growing slower.

The problem is there was no control group. Now, you could say they kind of acted as their own controls; probably not just a coincidence that their tumors started growing slower right when they started the juice.

Maybe tricking people into drinking pomegranate-flavored Kool-Aid would have the same effect. You think you’re doing something for yourself, and so the cancer might slow.  You don’t know, until you put it to the test.

So, any effect appears to just be a placebo. It’s the same story with pomegranate extract pills. They seemed to work, until they went head to head with sugar pills, and fell flat on their face.

We would love it if you could share with us your stories about reinventing your health through evidence-based nutrition. Go to NutritionFacts.org/testimonials. We may share it on our social media to help inspire others. To see any graphs charts, graphics, images or studies mentioned here, please go to the Nutrition Facts Podcast landing page. There you’ll find all the detailed information you need plus links to all of the sources we cite for each of these topics.

The Latest on Women’s Health

2 responses to “The Latest on Men’s Health”