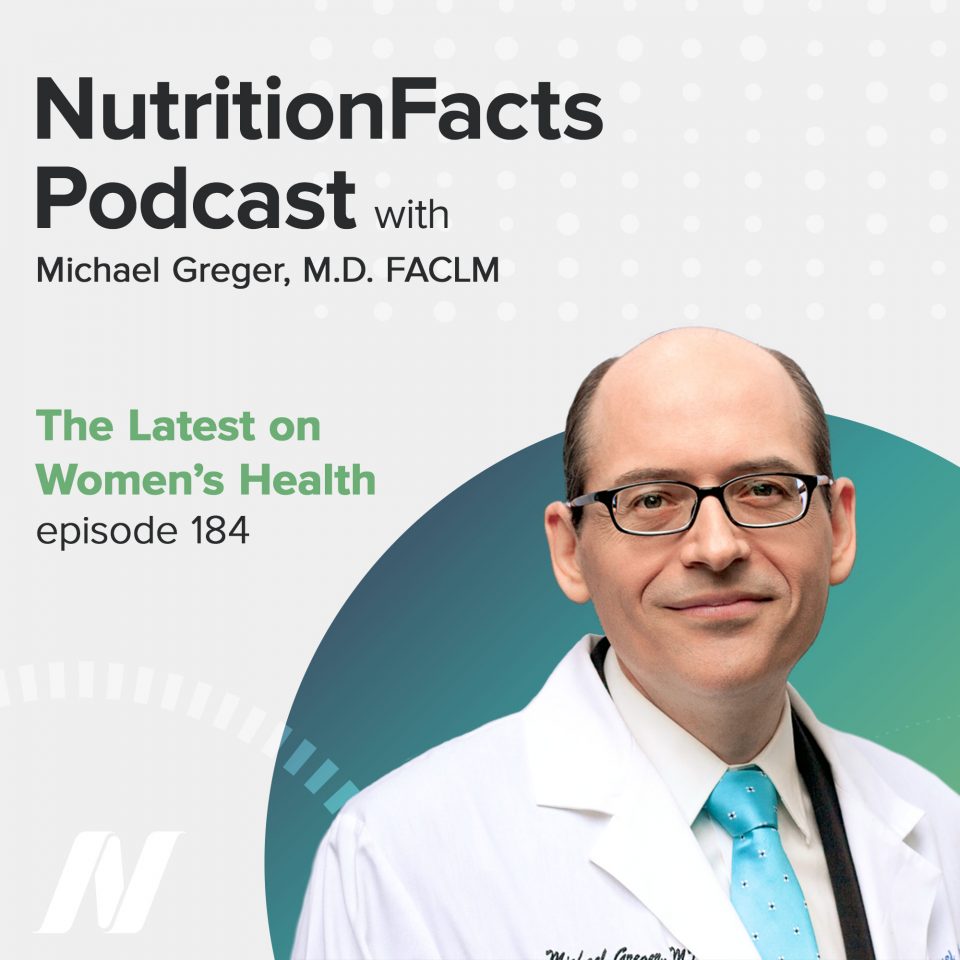 Today we look at DHA use in pregnant women and the risks of hormone therapy.

This episode features audio from Should Vegan Women Supplement with DHA during Pregnancy? and How Did Doctors Not Know About the Risks of Hormone Therapy?. Visit the video pages for all sources and doctor’s notes related to this podcast.

On today’s show I discuss some of the latest research affecting women’s health starting with the recommendation of DHA use for pregnant women.

A systematic review of randomized controlled trials of DHA supplementation of pregnant and breast-feeding women failed to find any clear and consistent short or long-term benefit for psychomotor, mental, visual, or physical development.

Maybe DHA supplementation during pregnancy has no effect because the body isn’t stupid and protects the growth of the baby’s brain by drawing off of maternal stores of DHA, upregulating maternal DHA synthesis, and preferentially shuttling it to the fetus, but what if moms don’t start out with large maternal stores?

In other words, maybe DHA failed to help women who were already getting enough, but maybe women with very low intakes would benefit from DHA supplementation. Well first, it’s interesting to note that even by 1978 researchers were suggesting plant-based diets as the diets of choice in the treatment of our number one killer, but babies breastfed by vegan moms had significantly less DHA in their bloodstreams, presumably because the moms had significantly less DHA in their breastmilk.

The question is whether these differences are of any consequence? The growth and development of vegan and vegetarian children are normal, as long as they’re getting their B12; no evidence that neural or intellectual functions are impaired. In fact, the two studies we have on vegetarian kids showed they had higher IQ’s, though that may have been because their parents tended to be better educated. But even though the kids seemed fine, that doesn’t rule out the possibility that there may be some subtle differences in visual or neural function.

It would be interesting to compare the function of babies getting vegan breast milk levels versus general population levels. Vegans had 14, vegetarians 30, and omnivores 37. This study compared zero to 32, 64, and 96, and 32 worked better than zero, but more than 32 didn’t add anything. This could explain why the general population at 37 doesn’t benefit from additional DHA supplementation, but what about down at 14? Most studies down at that level show no advantage over zero, though one study found a benefit supplementing at as low as 5, but that doesn’t help us.

Now, just because babies breastfed by vegan moms have significantly lower DHA levels in the blood, that doesn’t necessarily mean they have lower levels in their brain, which is where it counts. What we need is a randomized, controlled trial in non-fish-eaters of DHA supplementation. Until then, it’s going to remain uncertain. So, what should pregnant and breastfeeding women who avoid fish do in the meanwhile? Low intakes of DHA doesn’t necessarily equate with fetal DHA inadequacy, but these new data suggest that some infants may not be getting enough and could benefit from their moms supplementing; and so, I recommend pregnant and breast-feeding women on plant-based diets do follow the consensus guidelines to get about 200mg of preformed DHA from an uncontaminated source, like algae oil, which is probably the best combination for all women given the state of our world, to minimize exposure to toxic pollutants such as dioxins, PCBs, and mercury.

In our next story we examine how women were placed in harm’s way by their physicians, who acted as unsuspecting patsies for the drug companies.

We’ve known about the role of estrogen in breast cancer going back to the 1800s, when in some cases, surgical removal of the ovaries seemed to help. Ovaries were said to send out mysterious influences to the rest of the body, which, in 1923, we identified as estrogen. The medical profession jumped on this discovery, and started injecting menopausal women by the thousands shots that gave a respectable hook on which to hang visits to the doctor. Soon, there were pills, and patches, and medical journals, like the Journal of the American Medical Association, regaled doctors with ads on how they can “help women to happiness” by prescribing estrogen.

As far back as the 40s, concerns were raised that this practice might cause breast cancer, noting it would have been nice to figure this out first, before we started dosing women en masse. But breast cancer risk didn’t matter, because heart disease is the #1 killer of women, concluded reviews, and because women taking hormones appeared to have lower heart attack rates that would outweigh the extra breast cancer.

But, women taking estrogen tended to be of higher socioeconomic class, tended to exercise more, and engage in other healthy lifestyle changes, like increased fiber intake and getting their cholesterol checked. So, maybe that’s why women taking estrogens appeared to be protected from heart disease. Maybe it had nothing to do with the drugs themselves. Despite the medical profession’s enthusiasm for the stuff, only a randomized clinical trial could really resolve this question. You split women into two groups; half get the hormones; half get a placebo, and you follow them out for a few years. But, there was no such study, until the 1990s, when the Women’s Health Initiative study was designed.

Wait a second. Why did it take the bulk of a century to decide to definitively study the safety of something they prescribed to millions of women? Maybe it’s because there had never been a female director of the National Institutes of Health until then. Just three weeks after being named NIH Director, she went before Congress to announce, “We need a moonwalk for women.” And, that “moonwalk” took the form of the Women’s Health Initiative study.

The bombshell landed. Summer, 2002. There was so much more invasive breast cancer in the hormone users that they were forced to stop the study prematurely. Yeah, but what about heart disease? Wasn’t that supposed to balance things out? The women didn’t just have more breast cancer; they had more heart attacks, more strokes, more blood clots to their lungs.

The news that women treated with hormone replacement therapy experienced higher rates of breast cancer, cardiovascular disease, and overall harm rocked women and physicians across the country. Estrogen started out as the most prescribed drug in America before the study, but the number of prescriptions dropped immediately, and, within a year, so did the incidence of breast cancer in the United States.

But the most important part of this story was why were we all so surprised? There had been decade after decade of repeated warnings about the risks of cancer. In fact, the reason breast cancer patients had so much trouble suing the drug company was that the drugs contained warning labels for decades. And, having disclosed it, surely, any reasonable physician would have included it in their risk and benefit discussion with their patients. It’s like the warning labels on packs of cigarettes. If you get lung cancer, now, you should have known better. And so, if you got breast cancer, don’t blame the drug company. They warned you about the risks, right there, clear as day.

Why didn’t more doctors warn their patients? Even after the study came out, millions of prescriptions continued to be dispensed. That’s a lot of cancer in our patients we caused, wrote one doctor. How long will it take us to stop listening to the drug companies, “admit that we are harming many of our patients, and start changing our prescription habits?” Why did this practice continue in the face of mounting evidence of harm?

Well, it is a multibillion dollar industry. Despite an overwhelming amount of evidence to the contrary, many physicians still believe that estrogenic hormones have overall health benefits, a non-evidence-based perception that may be the result of decades of carefully orchestrated corporate influence on the medical literature. Dozens of ghostwritten reviews were published in medical journals to promote unproven benefits, and downplay the harms of menopausal hormone therapy. They’d pay PR companies to write the articles, and then pass them off as written by some expert.

So, “gynecologists must switch allegiance from eminence-based to evidence-based medicine”, consider what the science actually says, and not just what some so-called expert says. One might say the “current culture of gynecology encourages the dissemination of health advice based on advertising, rather than science. Women were placed in the way of harm by their physicians, who acted as unsuspecting patsies for the pharmaceutical companies.”

If we really wanted to prevent heart attacks in women, simple lifestyle behaviors can eliminate more than 90% of heart attack risk. So, instead of being Big Pharma’s pawns, recommending a healthful diet, increased exercise, and smoking cessation would truly benefit women’s health.

To see any graphs, charts, graphics, images or studies mentioned here, please go to the Nutrition Facts Podcast landing page. There you’ll find all the detailed information you need plus links to all of the sources we cite for each of these topics.

Alcohol and Your Health