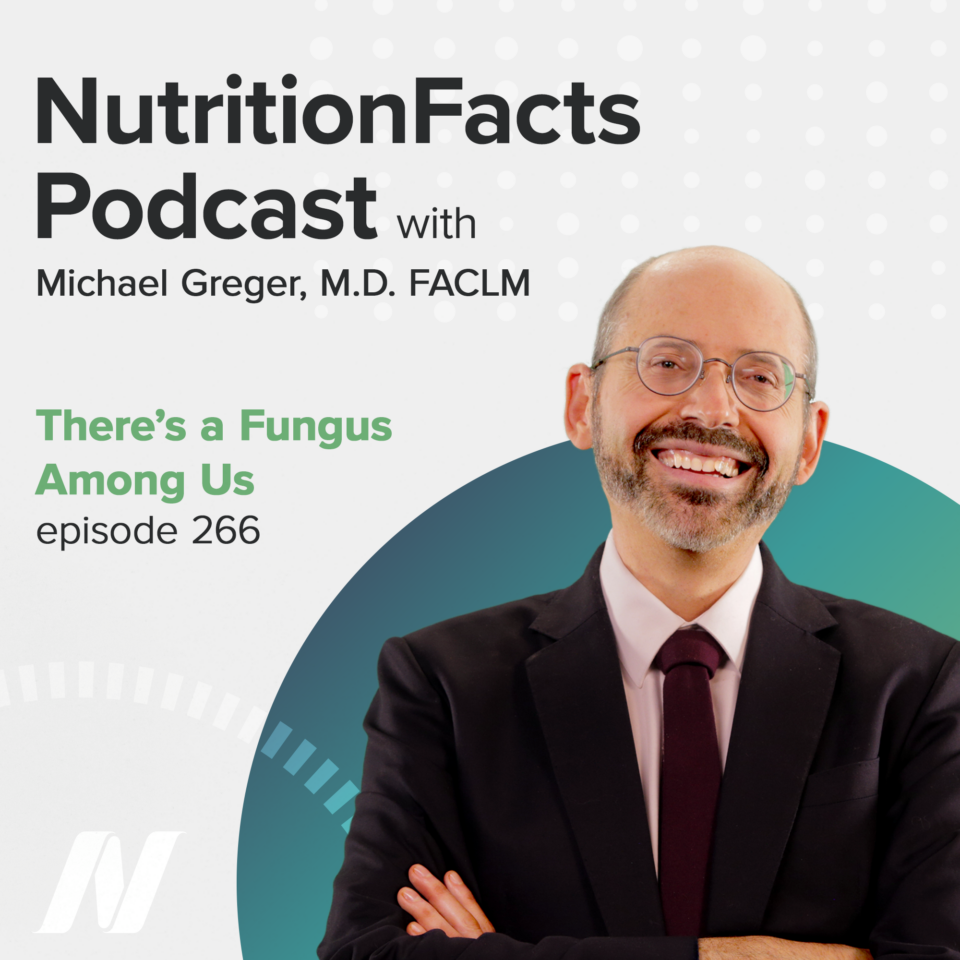 Lots of food contains mold toxins. Here’s how to avoid them.

This episode features audio from Ochratoxin in Breakfast Cereals and Ochratoxin in Certain Herbs, Spices, and Wine. Visit the video pages for all sources and doctor’s notes related to this podcast.

Today, we have the first in a 4-part series on molds that show up in our food. They produce mycotoxins – and we’ll find out which foods contain them and how concerned we should be about ingesting them. And we’ll start with breakfast cereals.

In France, exposure to dietary contaminants was compared between vegetarians and meat-eaters, and the results showed that exposures to persistent organic pollutants like PCBs and dioxins was dramatically lower among those eating more plant-based, due to the non-consumption of foods of animal origins—though they did have higher estimated exposure to some mycotoxins, fungal toxins present in moldy food.

Now, there are many types of mold on the planet, and the vast majority are harmless. But over the last several years, certain mold toxins, such as aflatoxin and ochratoxin, have been popping up in breakfast cereals. Hundreds of samples were taken off store shelves, and about half were contaminated with ochratoxin, for example. But those were store shelves in Pakistan. Pakistan has a sub-tropical climate with monsoons and ﬂash ﬂoods, leading to fungal propagation.

One hundred forty-four samples were collected, and similar to other countries, about half were found to contain ochratoxin. But only about 7 percent exceeded the maximum limit established by the European Commission. What is the signiﬁcance of the finding of ochratoxin in breakfast cereals from the United States? This was the largest study to date, including nearly 500 samples of cereal off store shelves across the U.S. Overall detection rates were about 40 percent, though only 16 violated the European standards. All the cereals with ochratoxin were oat-based, making about one in 13 of the oat-based breakfast cereal samples tested being contaminated.

Ochratoxin has become increasingly regulated by many countries to minimize chronic exposure. Some countries are very strict, like in the European Union, other countries less so, and one country in particular has no standards at all. Ochratoxin is not currently regulated at all in the United States.

What if you stick to organic products? One might expect them to actually be worse, owing to the fact that fungicides are not allowed in organic production. However, mycotoxin concentrations are usually similar or even reduced in organic, compared with conventional products.

For example, in one of the breakfast cereal studies, researchers found similar contamination, and the same was found for infant foods. It cannot be concluded that one is better than the other from a mycotoxin perspective. Despite no use of fungicides, organic systems appear generally able to maintain mycotoxin contamination at low levels. But how much is that saying, given how widespread it is? How concerned should we be about the public health effects from long-term exposure of this potent mycotoxin?

If you look at blood samples taken from populations going back decades, sometimes 100 percent of people turn up positive for ochratoxin circulating in their bloodstream. In some sense, they are unavoidable contaminants of food, since the detection of mycotoxins is not always easy and they can remain hidden. And once foods have become contaminated, mycotoxins aren’t destroyed by cooking. So, are there some foods we should simply try to avoid due to higher risk of contamination? That’s exactly the question I’m going to address next.

Oats can be thought of as uniquely nutritious, and one route they improve human health is by providing prebiotics that increase the growth of beneficial gut microbiota. Of course, there are oats and then there are oats, ranging from steel-cut oats, to, even better, intact oat groats (they’re formed before being cut), all the way down to highly processed cereals such as Honey Nut Cheerios.

Rolling crushes the grain, which may disrupt cell walls and damage starch granules, making them more available for digestion––which is bad, since we want the starch to make it all the way down to our colon to feed our good gut bacteria. Grinding into oat flour to make breakfast cereals is even worse. If you compare the blood sugar and insulin responses, you can see significantly lower spikes with the more intact steel-cut oats.

Okay, but what about ochratoxin? Oats are the leading source of dietary exposure of this mold contaminant, but they aren’t the only source. There’s a worldwide contamination of food crops with mycotoxins, with some experts throwing around estimates as high as 25 percent of the world’s crops. That statistic is attributed to the Food and Agriculture Organization of the United Nations. But it turns out that stat is bogus. It’s not 25 percent. Instead, it may be more like 60 to 80 percent. The high occurrence is likely explained by a combination of the improved sensitivity of testing methods, as well as the impact of climate change.

Spices have been found to have some of the highest concentrations of mycotoxins, but because they are ingested in such small quantities, they’re not considered to be a signiﬁcant source. We can certainly do our part to minimize risk, though. It is also the consumers’ responsibility to keep spices dry after opening sealed containers or packages.

What about dried herbs? Mycotoxins in plant-based dietary supplements: the highest mycotoxin concentrations were found in milk thistle-based supplements. It turns out that wet and humid weather is needed during milk thistle harvest, which evidently is why they end up being so moldy. Considering the fact that milk thistle preparations are mainly used by people who suﬀer from a liver disease, such high intake of compounds toxic to the liver may present some concern.

Wine sourced from the United States also appears to have particularly high levels. In fact, the single highest level found to date around the world is in an American wine, but there’s contamination in wine in general. In fact, some suggest that’s why we see such consistent levels in people’s blood—perhaps because lots of people are regular wine drinkers.

Ochratoxin is said to be a kidney toxin with immunosuppressive, birth defect-causing, and carcinogenic properties. So, what about ochratoxin decontamination—removing the toxin—in wine? Now ideally, we’d try to prevent the contamination in the first place, but since this isn’t always practical, there is increased focus on finding effective methods of detoxification of mycotoxins already present in foods.

And that’s where yeast comes in as a promising solution, because the mycotoxins bind to the yeast cell wall. The thought is that you could strain out the yeast, but another approach would be to eat something like nutritional yeast to prevent the absorption.

It works in chickens. Give yeast along with aflatoxin (another mycotoxin), and you diminish the severity of the resulting disease. But using something like nutritional yeast as a binder depends on the stability of the yeast-mycotoxin bond throughout the digestive tract. We know yeasts can remove ochratoxin in foods, but we didn’t have a clue if it would work in the gut until 2016. Yeast was found to bind up to 44 percent of the ochratoxin, but in actuality, it was probably closer to only about a third, since some of the bindings weren’t stable.

So, if you’re trying to stay under the maximum daily intake, and you drink a single glass of wine, even if your bar snack is popcorn seasoned with nutritional yeast, you’d still probably exceed the tolerable intake.

Toxic Mold and You