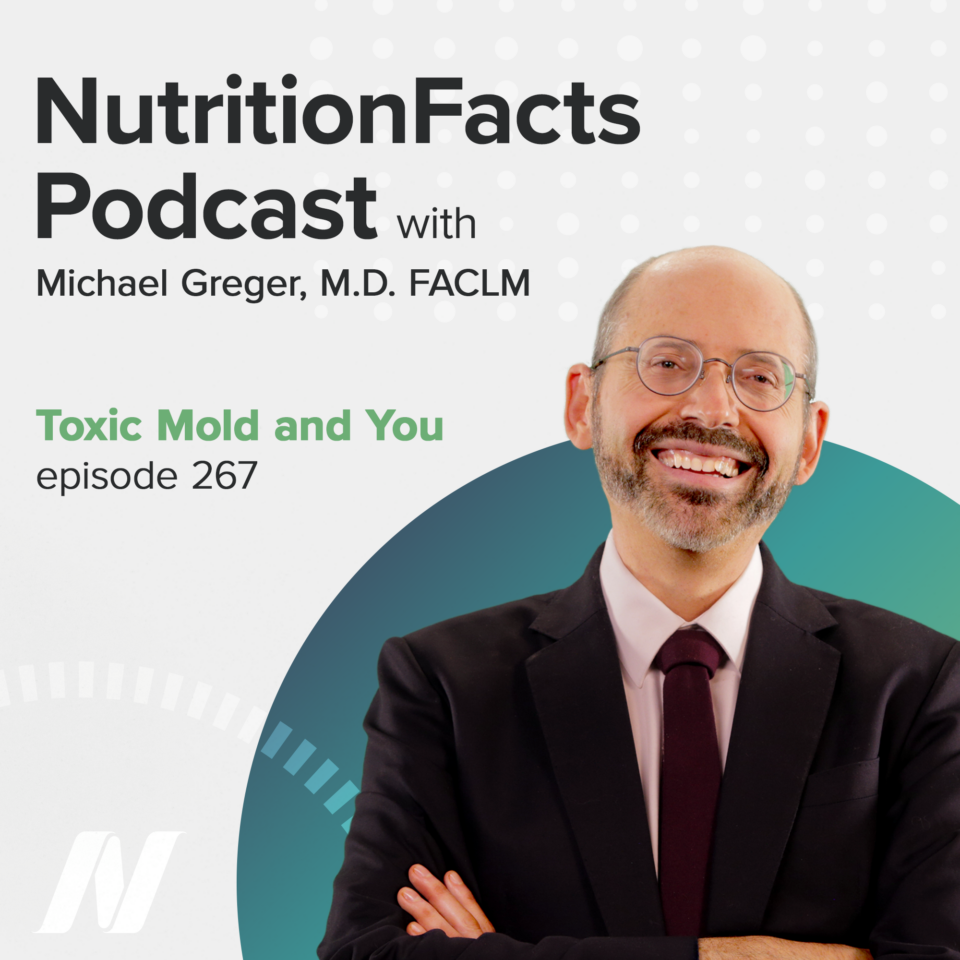 This is not the kind of mold you find in your basement.  This is the kind you eat without knowing it.

Let’s say you’re trying to lose 20 pounds – or boost your immunity – or increase your ability to fight Covid – or even cancer. Well – the amazing thing is – with the right diet – you are well on your way to achieving these vital health goals. Welcome to the Nutrition Facts podcast. I’m your host Dr. Michael Greger.

Today, we have more information about the toxic mold found in our food supply. And as it turns out, the overall cost-benefit ratio for mycotoxins depends on which food is contaminated.

Ochratoxin has been described as toxic to the immune system, developing fetus, kidneys, nervous system, as well as being carcinogenic—but that’s in animal studies. Ochratoxin causes kidney toxicity in certain animal species, but there is little documented evidence of adverse effects in humans. That’s why it’s only considered a possible human carcinogen.

Big Ag assures that current ochratoxin levels are safe, even among those who eat a lot of contaminated foods. The worst-case scenario may be young children eating a lot of oat-based cereals. But even then, their lifetime cancer risk is considered negligible, with those arguing against regulatory standards suggesting you can eat more than 42 cups of oatmeal a day and not worry about it. Where do they get these kinds of estimates?

They determine the so-called benchmark dose in animals—the dose of the toxin that gives a 10 percent increase in pathology—and then, because you want to err on the side of caution, you divide that dose by 500 as a kind of safety fudge factor to develop the tolerable daily intake.

For cancer risk, you can find the tumor dose—the dose that increases tumor incidence in lab animals by 5 percent—and extrapolate down to the ”negligible cancer risk intake,” effectively incorporating a 5,000-fold safety factor. It seems kind of arbitrary, right? But what else are you going to do? You can’t just intentionally feed people the stuff and see what happens. Though look; people eat it all the time. Can’t we just follow people and their diets out over time and see if people who eat more whole grains, like oats, for example, are more likely to have cancer or live shorter lives?

What is the association between whole grain intake and all-cause, cardiovascular, and cancer mortality? Every additional ounce of whole grains a day is associated with not only a lower risk for cancer, but also a lower risk of dying from all causes put together.

Bottom line is that you don’t find adverse effects confirmed in these population studies. This is not to say ochratoxin is necessarily harmless, but any such risk it does pose doesn’t outweigh the known beneﬁts of whole grain consumption. In fact, healthy constituents of the whole grains themselves, like the antioxidants, may directly reduce the impacts of mycotoxins by protecting cells from damage. So, eating lots of fruits and vegetables may also help. Either way, a healthy diet can play a signiﬁcant role in mitigating the risk.

In summary, healthy foods like whole grains are good, but not as good as they could be because of ochratoxin, whereas less healthful foods, like wine and pork, are worse because of the mycotoxin. Ochratoxin was detected, for example, in 44 percent of tested pork.

In our next story, we ask – is “toxic mold syndrome” a real thing? And, what do we do about toxic mold contamination of food?

In recent years, mold has been blamed for all sorts of vague subjective symptoms, but we have little scientific evidence that mold has anything to do with them. However, this concept of “toxic mold syndrome” has permeated the public consciousness, perpetuated by disreputable predatory practices, by those making money testing homes for mold spores or testing people’s urine or blood. But all these tests are said to just further propagate misinformation and inflict unnecessary and often exorbitant costs on patients desperate for a diagnosis. “The continued belief in this myth is perpetuated by those charlatans who believe that measles vaccines cause autism, that homeopathy works, that fluoride in the water should be removed…”

Mold toxin contamination of food, however, has emerged as a legitimate issue of serious concern––perhaps even more important than other contaminants that might make their way into the food supply. Hundreds of different types have been identified, but only one has been classified as a known human carcinogen, and that’s aflatoxin. The ochratoxin I talked about before is a possible human carcinogen, but we know aflatoxin causes cancer in human beings. In fact, aﬂatoxins are amongst the most powerful carcinogens we know about.

For example, it has been estimated that about a fifth of all liver cancer cases may be attributable to aflatoxins. And, since liver cancer is the third-leading cause of cancer deaths worldwide and kills so rapidly after diagnosis, the contribution of aflatoxins to this deadly cancer is quite significant. And once it makes it into the food, there is almost nothing you can do to remove it. Cooking, for example, doesn’t help. So, once it makes it into crops, or the meat, dairy, and eggs from animals consuming those crops, it’s too late. So, we have to prevent contamination in the first place, and that’s what we’ve been doing for decades in this country. Because of government regulations, companies are almost “always sampling” for aflatoxin, resulting in nearly a billion dollars in losses every year, which may get worse if climate change worsens aflatoxin contamination in the Midwest Corn Belt.

So, on a consumer level, it’s really more of a public health problem in the less-industrialized world, such as African countries where conditions are ripe and farmers can’t afford to throw away a billion dollars’ worth of crops. Indeed, aflatoxin remains a public health threat in Africa, rural China, and Southeast Asia, affecting more than half of humanity––which explains why the prevalence of liver cancer in those areas may be 30 times higher, but is not a major problem in the U.S. or Europe.

For example, only about 1 percent of Americans have detectible levels of aflatoxins in their bloodstream. Why even 1 percent though? Well, the FDA works to ensure that the levels of exposure to these toxins are not kept as low as possible, but, instead, as low as practical. For example, in California there has been an increase in unacceptable aflatoxin levels in pistachios, almonds, and figs. Unacceptable in Europe, that is. So, it affects our ability to export, but not necessarily unacceptable for U.S. consumers, as we allow twice as much aflatoxin contamination.

Figs are unique, since they’re allowed to dry on the tree. This makes them particularly susceptible to aﬂatoxin production. It would be interesting to know about the fig-consuming habits of the 1 percent of Americans who turned up positive for the toxin. If figs were to blame, I’d encourage people to diversify their dried fruit consumption, but nuts are so good for us that we really want to keep them in our diets. The cardiovascular health beneﬁts outweigh the carcinogenic effects, preventing thousands of strokes and heart attacks for every one case of liver cancer. “Thus, the population health beneﬁts provided by increased nut consumption clearly outweigh the risks associated with increased aﬂatoxin B1 exposure.”

So, we’re left with aflatoxin being mostly a problem in the developing world, and because of that, it remains a largely and rather shamefully ignored global health issue. Where attention has been paid, it has been largely driven by the need to meet stringent import regulations in the richer nations of the world, rather than to protect the billions of people exposed on a daily basis.

There’s a Fungus Among Us