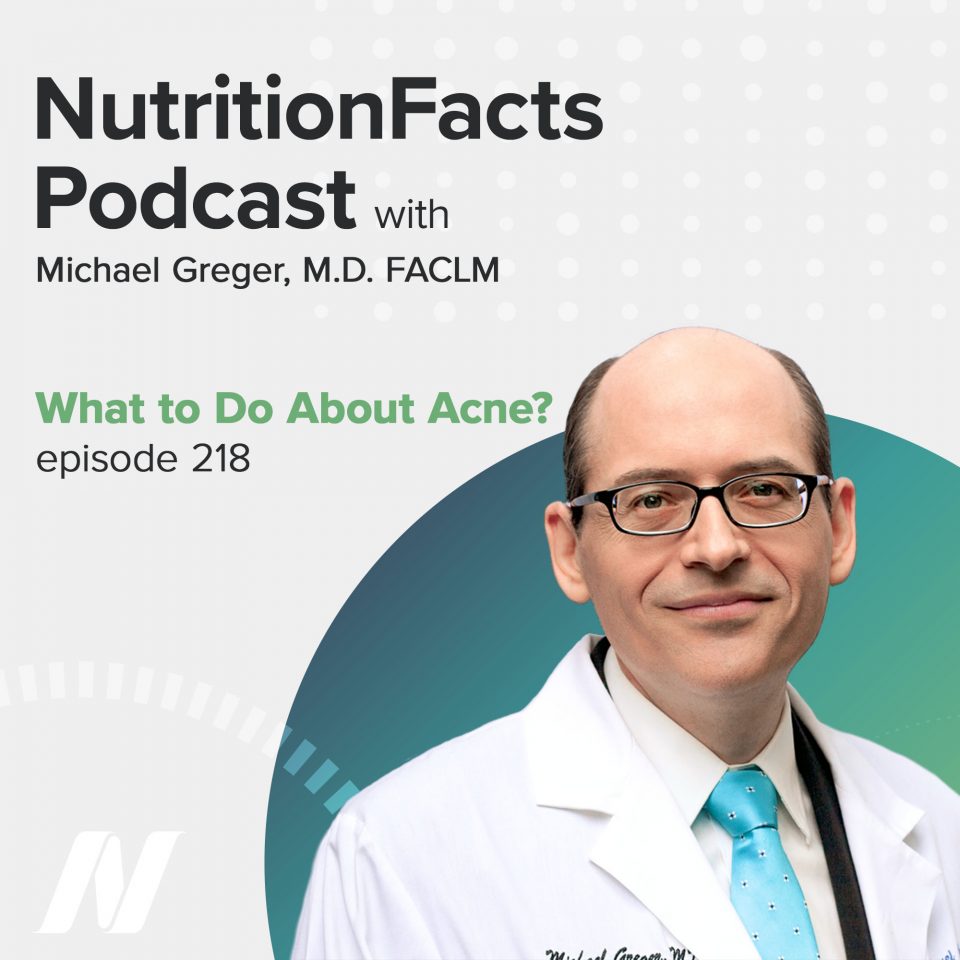 Acne can show up at any time. Today on the Nutrition Facts podcast, we look at some of the culprits.

This episode features audio from Do Sunflower Seeds Cause Acne?, The Acne-Promoting Effects of Milk, and Benzoyl Peroxide vs. Tea Tree Oil for Acne. Visit the video pages for all sources and doctor’s notes related to this podcast.

Today – it’s all about those pesky skin bumps and blemishes that always seem to show up at the worst possible time.

We start out with a kind of unusual question: Do sunflower seeds cause Acne? Let’s find out.

A recent observational study on acne reported a “statistically significant relationship [between] acne severity and dietary factors such as chocolate [and] dairy products”—both of which I have videos about. But this surprised me: sunflower seed consumption.

When I think sunflower seeds, I just think good whole-food source of nutrition found to lower cholesterol levels as much as almonds, which is pretty good. There are, however, right and wrong ways to eat them. If you sit down and eat a pound of unshelled sunflower seeds, just eat them with the shell still on, you can end up corked, with “a fist-sized mass of shredded sunflower seed shells.” How could a doctor diagnose such a thing? By the “colonic crunch” sign, of course. Sounds like a breakfast cereal served in hell. But, rather, it’s when you palpate “a large crunchy rectal mass.” I’ve got a picture for you, of course.

Can end up “a sharp, thorny mass,” which is why the so-called “sunflower seed syndrome” has been described as “a prickly proctological problem,” lamenting that “[p]eople who consume health foods occasionally fall into the trap of believing ‘if some is good, more is better.’” It’s not the amount, though; it’s how they’re eating them: with the shells still on. That’s why “the syndrome is uncommon, unless the patients are children [who don’t know any better] or adults who are either impaired or have no experience with eating sunflower seeds.”

Most cases involve younger children, but here researchers describe a “psychologically sound” 13-year-old, stressing “the importance of the role of the parents [to guide] their children…about the potential problems associated with the ingestion of [too many] unshelled seeds.”

You can overdo even shelled seeds, though. Because of just the nature of sunflowers: they’re good at drawing the naturally-occurring heavy metal cadmium out of the ground. So, sunflowers end up with higher levels than most foods, even if grown in relatively uncontaminated soil. Though people who consume large amounts of sunflower seeds don’t seem to suffer any untoward effects, or even end up with detectably higher cadmium levels, here they defined large amounts as greater than an ounce a week, which is like a handful—about 150 seeds.

The World Health Organization recommends staying below about 490 micrograms of dietary cadmium a week. Even if you ate a handful a day, you’d be well below that, but you may get as much as 36 micrograms a day from the rest of our diet. So, I think one handful a day of sunflower seeds is a reasonably safe upper limit.

Yeah, but will it give us acne? You don’t know, until you put it to the test. Yeah, but who’s going to do a randomized, controlled trial of sunflower seeds and acne? Nobody…until, now.

In our next story, we learn how dairy is considered a major cause of the acne epidemic.

Here’s the latest update, published in 2011. “Evidence for [the] acne-promoting effects of milk.” Though acne is an epidemic skin disease in Western countries, afflicting more than 85% of adolescents, acne is absent in non-Western populations, which do not consume milk and dairy products. They go on to review all the studies, which I’ve already talked about.

“By million years of evolution,” they conclude, “[the growth] signaling system of mammalian milk is exclusively and physiologically provided to the newborn only during the nursing period. The chronic ‘abuse’ of this mammalian postnatal signaling system by widespread cow milk and dairy consumption in humans of industrialized societies has been proposed to be the major cause of the acne epidemic and the more serious chronic Western diseases.” There’s lots of diseases associated with unrestricted growth. So, what should we do?

“There are two solutions to this problem: the restriction of milk protein consumption”—or we somehow engineer milk that doesn’t have these effects. Either way, both “restriction of milk consumption or the generation of less [insulin-affecting] milk will have an enormous impact on the prevention of epidemic Western diseases like obesity, diabetes mellitus, cancer, neurodegenerative diseases, and acne.”

Finally today – a 5% tea-tree oil gel is pitted head-to-head against the leading over-the-counter treatment for pimples.

“Acne…remains one of the commonest diseases to afflict humanity.” If you do online surveys, tea tree oil appears to be “the second most commonly used topical treatment” after benzoyl peroxide. Though crowdsourcing may be “a novel research method for evaluation of acne treatments,” before getting too enamored with popular wisdom, you should know there’s stuff like this circulating on the internet—the facial application of urine as a home remedy for acne.

“[U]rine therapy advocates cite historical use as proof of its therapeutic potential…as a ‘free cure’ for many systemic diseases,” apparently forgetting all the godawful, crazy skeletons crowding the closets of medical history. “While recycling what the body intentionally removes may seem counterintuitive to good health,” what about Premarin? The best argument this author could come up with for putting urine on your face is that hey—women, after all, swallow pills made from pregnant horse pee. I’m not exactly following the logic there.

Of course, there’s drugs for acne. There are always drugs, though, along with drugs come drug side-effects. Antibiotics that suppress the bacteria that cause acne “are the standard treatment for acne, but are becoming less effective, [presumably] because of the emergence of antibiotic-resistant strains.” The prevalence of resistant strains has apparently grown rapidly, such that antibiotics for acne are no longer recommended just by themselves, with re-evaluations advised every six to eight weeks.

Well, the bacteria do seem to be susceptible to tea tree oil in a petri dish, but these kinds of studies were performed with free-floating bacteria, whereas in pimples, the bacteria form what’s called a biofilm, which makes them generally “more difficult to eradicate.” The bacteria forms like a glue that plugs up the follicle. So, petri dish studies can only tell you so much.

Even if tea tree oil couldn’t kill off the bugs, though, it has been shown to suppress skin inflammation. Like if you inflame people’s skin with an allergen and then try to calm it down, tea tree oil did a decent job, compared to an over-the-counter ointment, or a moderate potency prescription steroid cream. So potentially, tea tree oil could help with acne via an antibacterial mechanism, or from an anti-inflammatory standpoint. But you don’t know until you put it to the test.

A 20% tea tree oil gel applied twice a day, and a beautiful drop in acne lesions after one…two…three…months. About 24 pimples down to about 11. They conclude that the study showed that tea tree oil could “significantly improve…mild to moderate acne.” But, who can tell me the study’s fatal flaw?

Right, there was no control group. How do we know they wouldn’t have healed even faster without it? In this “systematic review of randomized clinical trials” on tea tree oil, their “most striking finding” is that they could hardly find any. Given “the widespread use” of tea tree oil, “this is both disappointing and important to note.” But finally, a randomized, double-blind, placebo-controlled trial of a 5% topical tea tree oil gel in mild-to-moderate acne.

After six weeks in the tea tree oil group, a 40% drop in whiteheads and blackheads, a 40% drop in red and tender acne bumps, and a 47% drop in pus-filled pimples, compared to comparatively little change in the control group. Overall, in terms of total lesion count, the tea tree oil gel was three and a half times “more effective than placebo,”—three and a half times more effective than essentially doing nothing. But most teens don’t do nothing for their pimples. How does tea tree oil compare to the gold standard, benzoyl peroxide? We’ll find out…right now!

Benzoyl peroxide is by far the most popular over-the-counter acne therapy despite its side effects. It can be irritating, causing redness, dryness, peeling, stinging, or burning. However, the prescription option, “the long-term use of [topical or oral] antibiotics, is discouraged due to the development [and spread of antibiotic] resistance. As a result, [attention has turned to] non-antibiotic products such as tea tree oil.”

The benzoyl peroxide did cause more side effects—dryness, itching, stinging, redness, burning—but it worked better too, cutting the number of inflamed pimples by two-thirds within three months, versus only by half in the tea tree oil group, though the most recent study found them to be more comparable.