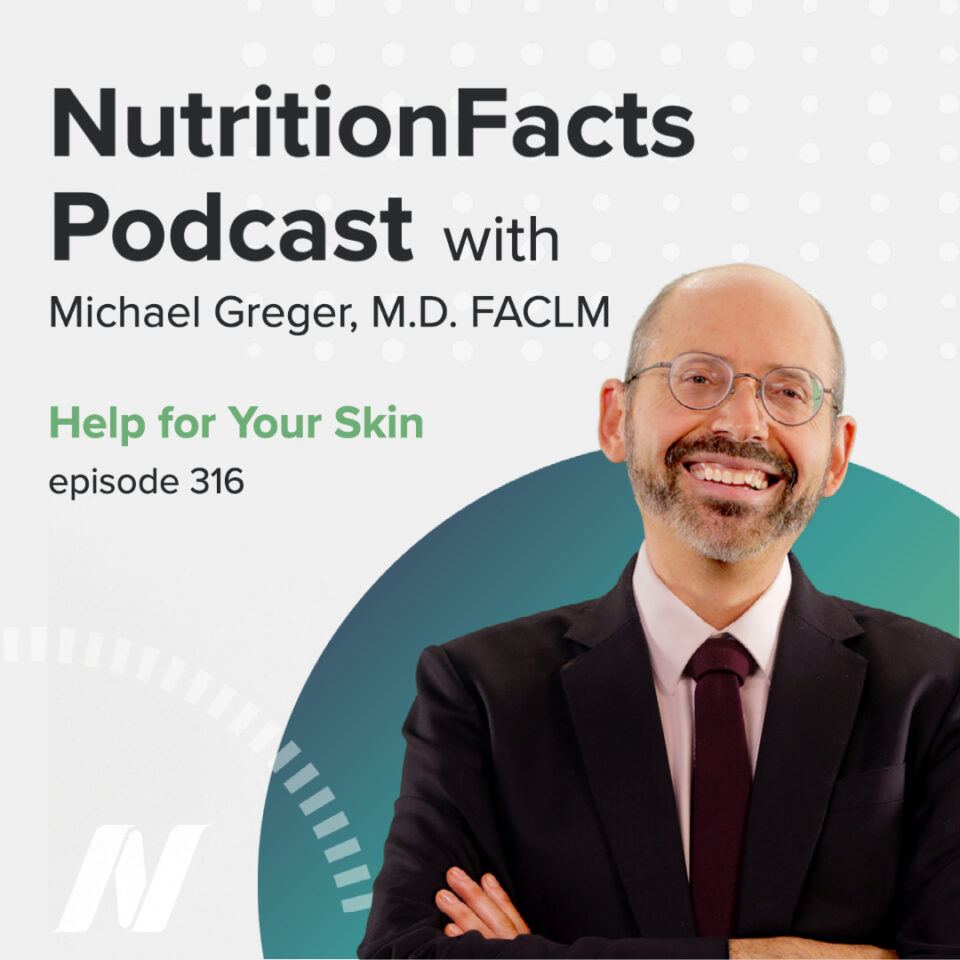 Many types of foods are better for our skin, and I’ll discuss some of them.

This episode features audio from How to Naturally Reduce Wrinkles with Food, Beauty Is More than Skin Deep, and Flaxseeds for Sensitive Skin. Visit the video pages for all sources and doctor’s notes related to this podcast.

We have a lot of choices to make about our diet. Add to that – doing the right thing when it comes to treating a chronic illness, fighting a virus, or losing weight, and suddenly, our nutrition choices can seem almost overwhelming.

Today, we take a look at the best way to take care of the largest organ in our body: our skin. In our first story, almonds are put to the test in a ​​randomized controlled trial for facial wrinkles.

After my video on dates blew my mind, showing that eating just a few dates can significantly reduce the duration of labor during childbirth and improve the progression of labor, But there are some surprising benefits attributed to nuts in randomized controlled trials, like how about a study on the effects of almond consumption on wrinkles? Where’d they even come up with the idea?

Well, population studies have found that healthy diets are associated with less facial wrinkles, like a meat and junk-predominant eating pattern was associated with more wrinkles, whereas a fruit-predominant pattern was associated with fewer wrinkles. In terms of single foods, yellow vegetables and soy appear protective, but wine may make things worse. Their thinking is that it might be the antioxidants in healthy foods decreasing the oxidative stress load, or the anti-inflammatory benefits, or protection from sun damage, or improved collagen production, or better DNA repair. I have videos on most of those topics. The bottom line is that eating healthier may reduce wrinkling, which could actually save lives if people started eating healthier to maintain a more youthful appearance––and get all the chronic disease benefits as a happy side effect.

Other studies have found the same thing, supporting recommendations for more healthy foods like fruits, vegetables, and nuts. Here’s another study that landed on yellow vegetables, and greens as well. In this study, a high intake of vegetables, beans, and olive oil appeared to be protective against spots of precancerous sun damage, whereas a high intake of meat and dairy may make things worse. Prunes, apples, and tea seemed particularly good, but this was a cross-sectional study, meaning just a snapshot in time. Maybe people who eat more meat are out barbequing in the sun, or people who eat more prunes use more sunblock. You can’t know for sure if foods actually affect wrinkling until you put them to the test. But we had no such studies…until now.

Why study almonds? Because it was paid for by the Almond Board, of course. The researchers didn’t know who was in the nut group, though, and who was in the control group, until they were looking at the results. The nut group were given two ounces of nuts a day, like two palmfuls of nuts, and the control group was instead given nut-free snacks to eat instead, like nut-free granola bars or pretzels. Before and after, they got high‐res facial photographs to quantify facial wrinkle depth and severity using a computer‐based photographic analysis. And…boom, the almond group had significantly decreased wrinkle severity compared with the control group by the end of the 16-week study. The paper concludes: “Our study demonstrates that daily almond consumption may reduce wrinkle severity…”

Now, they used a relatively large dose––two ounces a day––whereas you can get cardioprotective benefits of nuts from even less than a half an ounce. So, who knows, maybe they could have gotten away with using less. Here’s the low-dose nut study they referenced, showing a significant drop in LDL cholesterol within six weeks eating just a few almonds a day—10 grams, which is just like eight almonds a day.

That’s the nice thing about healthy foods, they just have good side effects; so, global disease prevention strategies might beneﬁt from emphasizing that a healthy diet is also linked to less facial wrinkling, and maybe vanity will help us prevent a few heart attacks in the bargain.

In our next story, we discover how some foods appear protective against the development of skin wrinkles, while others may make them worse.

And, years of oxidant stress can take a toll. Over the years, skin becomes thinner, more easily damaged, loses volume, elasticity, and can sag and wrinkle.

What can we do about it? “Skin wrinkling: can food made a difference?” They measured healthfulness of skin using a microtopographic method. It’s cool; they make a mold of the back of your hand with a silicone rubber, peel it off, and then look at it under a microscope.

But, then, as we age, our skin can get all coarse and flaccid. How can we stop it? Well, three things contribute to the aging of skin: “Oxidative stress…induced by [sun]-damage, inflammation, and ischemia [lack of adequate blood flow].”

Oxidative stress means we need antioxidants. “Under these circumstances, many skin antioxidants undergo depletion…and must be replaced continuously in order to delay the otherwise inevitable deterioration which would lead to skin aging.” So, plant foods would presumably help.

And then, inflammation and lack of blood flow. And so, one might predict that saturated fat (inflammation) and cholesterol (ischemia), might be associated with adverse effects on our skin.

Let’s see if our predictions hold up. “In particular, a high intake of vegetables, [beans, peas, lentils, soy] and olive oil appeared to be protective” against skin wrinkling, whereas “a high intake of meat, dairy, and butter” appeared to have an adverse effect.

Prunes, apples, and tea appeared especially protective. A recent study, for example, found that green tea phytonutrients were able to protect skin against harmful UV radiation, and help improve skin quality of women. After a few months on green tea, there was a 16% reduction in skin roughness and a 25% reduction in scaling, as well as improved skin elasticity and hydration.

Finally today, we ask the question – instead of treating sensitive skin topically, with lotions and creams, why not treat it from the inside out—with diet?

Okay, so, what can we do about it? Well, recently, supplementation of flaxseed oil was found to diminish skin sensitivity and improve skin barrier function and condition. In a randomized, double-blind, 12-week study, women were given about a half teaspoon of flaxseed oil a day—internally—versus safflower oil, as a control. That’s the amount of oil found in about a teaspoon and a half of flaxseeds.

After three months, there was a significant decrease in skin reddening in the flax group compared to the safflower group, when an irritant chemical was painted on their forearms to measure skin sensitivity. Their skin also ended up significantly better hydrated, had significantly better barrier function—as evidenced by lower transepidermal water loss—skin that’s less rough, less scaly, and smoother. You can actually see the changes in a close-up view of the skin. Skin looked pretty much just as dry and scaly before and after the safflower oil intervention, but significantly improved after flaxseed oil.

Sensitive skin is typically treated by topical application of lotion and creams. But, why not treat it from the inside? “This study showed that daily supplementation with flaxseed oil improved skin appearance and led to a decreased skin sensitivity by improving epidermal barrier function and decreasing inflammation…”

The best source of flaxseed oil is within the flaxseed itself, right? Then, you get all the nutrition of the whole food, and it’s cheaper and more stable. Unlike the oil, you can bake with the seeds without destroying the omega-3s, and can even store ground flaxseed for a month, at room temperature, without spoilage or oxidation.

To see any graphs, charts, graphics, other images, or studies mentioned here, please go to the NutritionFacts podcast landing page. There you’ll find all the detailed information you need – plus links to all of the sources we cite for each of these topics.

For a vital, timely text on the pathogens that cause pandemics, you can order the E-book, audio book, or the hard copy of my latest book “How to Survive a Pandemic.” Or, go to your local public library, for that matter.

For recipes, check out my new “How Not to Diet Cookbook.” It’s beautifully designed, with more than 100 recipes for delicious and nutritious meals. And, of course, all proceeds I receive from the sales of my books go to charity.

Everything on the website is free. There’s no ads, no corporate sponsorship, no kickbacks. It’s strictly non-commercial. I’m not selling anything. I just put it up as a public service, as a labor of love – as a tribute to my grandmother – whose own life was saved with evidence-based nutrition.

All You Need to Know About Allulose

Getting Healthy at Work