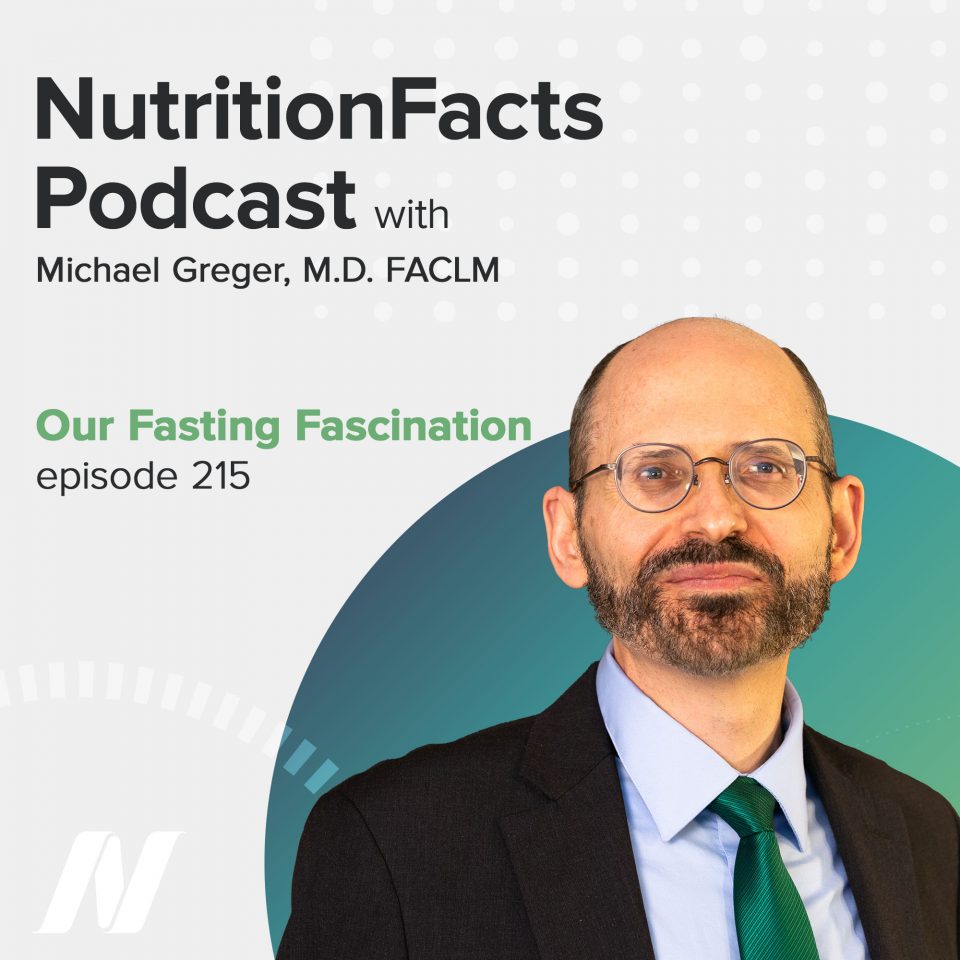 Fasting studies are coming out, fast and furious. Here are two new ones.

This episode features audio from The Benefits of Fasting for Healing and The World’s Largest Fasting Study. Visit the video pages for all sources and doctor’s notes related to this podcast.

There have been a lot of studies that have come out recently about fasting. In fact, I did a whole series on fasting recently. And, here are two more studies to add to our understanding.

We start off today with a study on the origins of therapeutic fasting.

The story of life on earth is a story of starvation. Ash from massive volcanoes and asteroids block out the sun, killing the plants, which then killed most everything else. As Darwin pointed out though, from this “war of nature, from famine and death, the most exalted object that we are capable of conceiving” arose—namely us.

We are “particularly well-adapted to prolonged fasting.” Evolving in a context of scarcity is believed to have shaped “our exceptional ability to store large amounts of [calories] when food is available.” Of course, now our ability to easily pack on the pounds is leading to modern diseases like obesity and type 2 diabetes, but without the ability to store so much body fat, we may not have made it to tell the tale.

And, it’s not just asteroids millions of years ago. “All of Upper Egypt was dying of hunger,” reads an inscription on an Egyptian tomb from about 4,000 years ago, “to such a degree that everyone had come to eating his children…” Or, just hundreds of years ago: “Parents killed their children and children killed parents” and ate them, and “the  bodies of executed criminals were eagerly snatched from the gallows.” Wiping out as many as two-thirds of the population of Italy and one-third of the population of Paris. So, we don’t have to go back to ancient history. Even the most secure and affluent populations of today need only trace their history back a short distance. For example, there have been nearly 200 famines in Britain over the last 2,000 years.

Now, we tend to be suffering from too much food, which carries its own problems, but might there be any negative consequences to not ever starving? This was a question raised 50 years ago. I mean, if our physiology is so well-tuned to periodic starvation, maybe by eliminating that we may be doing harm to our overall well-being? We just didn’t know.

The lack of research in the area of starvation was attributed to the “difficulty of securing willing human subjects.’’ So, what little we had came from unwilling subjects. Physicians within the Warsaw Ghetto made detailed accounts before they themselves succumbed; or Irish Republican prisoners starving themselves to death after up to 73 days on hunger strike. But, starvation isn’t necessarily the same as fasting, an issue raised in medical journals over a century ago. “Starvation is normally a forced, mentally stressful, and chronic condition, whereas [therapeutic] fasting is voluntary, limited in duration, and usually practiced by people [who start out with adequate nutrition].”

Therapeutic fasting? Where did we get this idea of fasting therapy, fasting for medical purposes? It may have originally arose out of the observation that when people get acutely ill they tend to lose their appetite; so, maybe there’s something in the body’s wisdom to stopping eating. That’s presumably where the whole “starve a fever” folklore came from.

There was this sense that fasting affords physiological rest for the body, not just for the digestive tract, but throughout, allowing the body to concentrate on healing. It was evidently an open secret that veterinarians used to hospitalize dogs only to fast them back to health; and so maybe, the theory went, it might work for people too.

Beyond just freeing up all the resources that would normally be used for nutrient digestion and storage, there’s this concept that during fasting, our cells switch over to some sort of protection mode. Why would fasting reduce free radical damage and inflammation and bolster cellular protection? It’s the that-which-doesn’t-kill-us-makes-us-stronger concept known as hormesis. So, that’s kind of the opposite of the let-the-body-rest theory. It’s more like let-the-body-stress. The stress of fasting may steel the body against other stresses coming your way. This was demonstrated perhaps most starkly in a set of cringeworthy experiments in which mice were blasted with Hiroshima-level gamma radiation sufficient to kill 50 percent within two weeks. But, of the mice who had first been intermittently fasted for six weeks before, not a single one died.

It’s this kind of dramatic data that led to extraordinary claims, like therapeutic fasting could drive half of all doctors out of business. But you don’t know, until you put it to the test, which we’ll explore next.

A century ago, fasting—starvation as a therapeutic measure—was described as the ideal measure for obesity (as you can see, fat shaming is not a new invention in the medical literature). I’ve extensively covered fasting for weight loss in a nine-video series starting with this one, but what about all the other purported benefits? I do have a video series on fasting for hypertension, but what about psoriasis, eczema, type 2 diabetes, lupus, metabolic disorder, rheumatoid arthritis and other autoimmune disorders, depression, anxiety—why hasn’t it been tested more?

One difficulty with fasting research is: what do you mean by fasting? When I think fasting, I think of water-only fasting, but in Europe they tend to practice so-called modified fasting, or Buchinger fasting, which is more like a very low-calorie juice fasting with some vegetable broth. Some forms of fasting may not even cut calories at all. Ramadan fasting is when devout Muslims abstain from food and drink from sunrise to sunset, yet interestingly, they end up eating the same amount, or even more food, overall.

The largest study on fasting to date was published in 2019. More than a thousand individuals were put through a modified fast, cutting intake down to about 10 cups of water, a cup of fruit juice, and a cup of vegetable soup a day. They reported very few side effects, which is in contrast to the latest water-only fasting data, which only involved half as many people, but reported nearly 6,000 adverse effects. Now, the modified fasting study did seem to try to undercount adverse effects, only counting reported symptoms if they were repeated three times, but still only reporting single cases of things like nausea, feeling faint, upset stomach, vomiting, or palpitations, whereas the water-only fasting study reported about one to two hundred of each. What about the benefits, though?

In the modified fasting study, participants self-reported improvements in physical and emotional well-being, along with a surprising lack of hunger. And,the vast majority of those who came in with a pre-existing health complaint reported feeling better, with less than 10 percent reporting their condition worsening or remaining unchanged. They weren’t just fasted though, but engaged in a lifestyle program, which included being placed before and after on a plant-based diet. Too bad they didn’t have some people just do the healthier diet without the fast to tease out the fasting effects.  Oh, but they did! About a thousand folks fasted for a week on the same juice and vegetable soup regimen versus those put on a normocaloric (meaning normal calorie) vegetarian diet the whole time.

Both experienced significant increases in both physical and mental quality of life, and interestingly, there was no significant difference between the groups. In terms of their major health complaints—rheumatoid arthritis, chronic pain syndromes like osteoarthritis, fibromyalgia, and back pain, inflammatory and irritable bowel disease, chronic pulmonary diseases, and migraine and chronic tension-type headaches, the fasting group appeared to have an edge, but both groups did good, with about 80 percent reporting improvements in their condition, with only about 4 percent feeling worse.

Now, this was not a randomized study; people chose which treatment they wanted; so maybe, for example, those choosing fasting were sicker or something. The improvements in quality of life and disease status were also all subjective self-report, which is ripe for placebo effects. No do-nothing control group, and the response rates to the follow-up quality of life surveys were only about 60-70 percent, which also could have biased the results. But, extended benefits are certainly possible, given they all tended to improve their diets. More fruits and vegetables, less meats and sweets, and therein may lie the secret. Principally, the experience of fasting may support motivation for lifestyle change. “Most fasters experience clarity of mind and a feeling of ‘letting go’ of past actions and experiences, and thus may develop a more positive attitude toward the future.”

As a consensus panel of fasting experts concluded, “Nutritional therapy is a vital and integral component of any fasting. After the fasting therapy and refeeding period, nutrition should follow the recommendations… of a plant-based whole-food diet….”

The Carbon Footprint of What We Eat