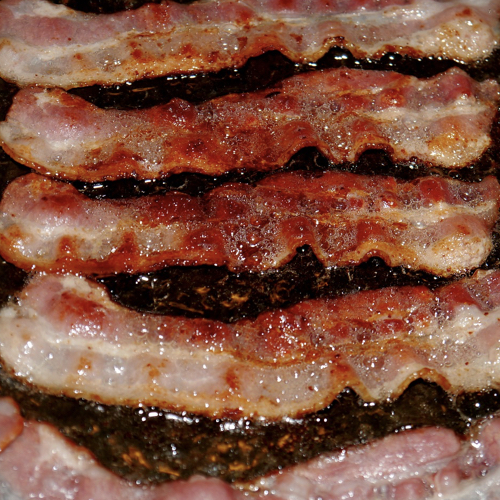 Learn more about the latest evidence-based research on bacon nutrition facts in the videos below.

The most comprehensive and systematic analysis of the causes of death involved nearly five hundred researchers from more than three hundred institutions in fifty countries and examined nearly one hundred thousand data sources. The landmark Global Burden of Disease Study found that processed meat, including bacon, is blamed for the deaths of more than eight hundred thousand people every year. Worldwide, that’s four times more people than who die from illicit drug use.

Aside from the high saturated fat and sodium content typical in processed meats, what else might these products contain that are harmful to our health?

Although fresh meat consumption has also been associated with cancer and some other chronic diseases, processed or cured meats may be particularly harmful. The NIH-AARP study of more than five hundred thousand Americans suggested that 20 percent of heart disease deaths among American women could be averted if the highest consumers of processed meat would cut down to the equivalent of less than a half strip of bacon a day. No wonder the American Institute for Cancer Research recommends that you simply “avoid processed meat such as ham, bacon, salami, hot dogs and sausages.”

What about that enticing aroma of sizzling bacon? The fumes produced by frying bacon contain a class of carcinogens called nitrosamines. Although all meat may release potentially carcinogenic fumes, processed meat like bacon may be the worst: A 1995 study found that its fumes cause about four times more DNA mutations than the fumes from beef patties fried at similar temperatures.

What’s more, a twin pair of studies from Columbia and Harvard Universities found that consumption of cured meat—like bacon, bologna, ham, hot dogs, sausage, and salami—may increase the risk of COPD. It’s thought to be due to the nitrite preservatives in meat, which may mimic the lung-damaging properties of the nitrite by-products of cigarette smoke.

All Videos for Bacon