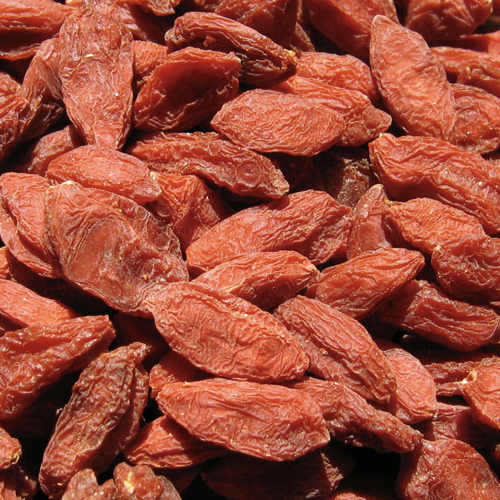 Goji berries have the highest concentrations of melatonin and the third-highest antioxidant capacity of any common dried fruit—five times more than raisins and second only to dried pomegranate seeds and barberries. Gojis also have a specific antioxidant pigment that makes corn yellow—zeaxanthin. When eaten, zeaxanthin is shuttled into our retinas and appears to protect against macular degeneration, a leading cause of vision loss.

Learn more about the latest research on goji berries in the videos below.

The nearly 500 researchers from more than 300 institutions in 50 countries who developed the 2010 Global Burden of Disease Study, the largest analysis of risk factors for death and disease in history, determined that the leading cause of both death and disability in the United States was the American diet, followed by smoking. What did they determine to be the worst aspect about our diet? Not eating enough fruit.

Berries are the healthiest fruits—in part due to their plant pigments. They evolved to have bright, contrasting colors to attract fruit-eating critters to help disperse their seeds. Colorful foods are often healthier because they contain antioxidant pigments, whether it’s the beta-carotene that makes carrots and sweet potatoes orange, the lycopene antioxidant pigment that makes tomatoes red, or the anthocyanin pigments that make blueberries blue. The colors are the antioxidants.

Second only to herbs and spices as the most antioxidant-packed food category, berries, as a group, average nearly 10 times more antioxidants than other fruits and vegetables (and exceed 50 times more than animal-based foods). In my Daily Dozen, I recommend a daily serving of berries, in addition to three servings a day of other fruits.

Berries offer potential protection against cancer, a boost to the immune system, and a guard for the liver and brain. An American Cancer Society study of nearly one hundred thousand people found that those who ate the most berries appeared significantly less likely to die of cardiovascular disease.

Image Credit: miheco / Flickr. This image has been modified.

All Videos for Goji Berries