Cholesterol is a vital component of our cells, which is why our body makes all that we need. Elevated cholesterol in our blood is implicated in many serious health concerns. We know that many whole-food sources of fat, like nuts, can lower our levels. What about avocados? Can we dig into some guacamole and get cholesterol-lowering benefits, or is that just spin by the avocado industry?

What Are the Dangers of High Cholesterol?

For most Americans eating a conventional diet, plaque accumulates inside the coronary arteries that feed our heart muscle. This plaque buildup, known as atherosclerosis, is the hardening of the arteries by pockets of cholesterol-rich fatty material that builds up beneath the inner linings of the blood vessels. This process seems to occur over decades, slowly bulging into the space inside the arteries, narrowing the path in which our blood flows.

Restriction of blood circulation to the heart may lead to chest pain and pressure when we try to exert ourselves. If the plaque ruptures, a blood clot may form within the artery. This sudden blockage of blood flow may cause a heart attack, damaging or even killing part of the heart.

Are Avocados Good for Cholesterol?

Phytosterols are the cholesterol-lowering nutrients found in plants, and avocados are the richest known fruit source, according to a review sponsored by the HASS Avocado Board. The operative word is fruit.

What if you compare the phytosterol content of avocados to nuts and seeds? One avocado has about 100 milligrams of phytosterols. On a similar scale, sesame seeds and tahini have about 400 milligrams; pistachios, pumpkin seeds, and sunflower seeds have about 300; and almonds, almond butter, flaxseeds, and macadamia nuts around 200. Even chocolate has about twice as many phytosterols as avocados, as you can see at 0:51 in my video Are Avocados Good for Your Cholesterol?.

Even though nuts and seeds have such high levels of phytosterols, the studies that have been done on lowering so-called bad LDL cholesterol with phytosterols have used supplements starting with 600 milligrams and going up into the thousands of milligrams. So, yes, you can lower LDL cholesterol by about 8 percent with a dose of phytosterols around 2,100 milligrams, but that would be about 20 avocados a day, as you can see at 1:17 in my video. And 2,100 milligrams of phytosterols would also be a lot of nuts, but you can get an 8 percent drop in LDL by just eating a palmful of nuts, just a single ounce a day, as you can see in the graph below and at 1:36 in my video. So, phytosterols aren’t the only components of nuts responsible for driving down cholesterol. Nuts must have other components, perhaps fiber or other phytonutrients, that contribute to their cholesterol-lowering effects. Might avocados have such components, too? You don’t know until…you put it to the test. 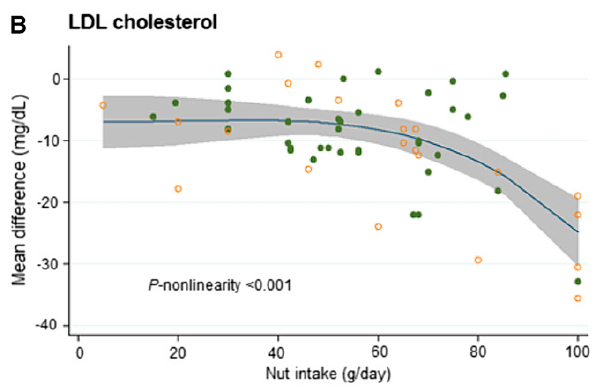 As you can see in the figure below and at 2:10 in my video, there are studies dating back more than a half century that appear to show that if you add an avocado to people’s daily diets, their cholesterol drops. When you remove the daily avocados, however, their cholesterol goes back up, and then it drops down again when you add the avocados back in. The data are pretty convincing—until you see how the study was done. The researchers didn’t just add an avocado. They swapped out animal fat. No wonder the participants’ cholesterol went down! Rather than a study about cholesterol and avocados, it may just as well have been about cholesterol and being on or off lard. And, nearly all of the studies on cholesterol and avocados are similarly designed.

What happened when researchers performed a meta-analysis of ten studies involving hundreds of people? When they put them all together and looked at the results, what did they find? It appears that adding avocados led to a significant drop in cholesterol and triglycerides—an average of about a 17-point drop in bad LDL cholesterol. But, once again, nearly all of the studies were substitution studies, where saturated fat was removed from people’s diets and avocados were substituted in. If you cut down on saturated animal fat, your cholesterol will drop. You can tell this meta-analysis was not funded by the avocado industry because the researchers point out that “it is important to note that substituting avocados for saturated dietary fats as opposed to adding avocado to an already established baseline diet poses the greatest benefit.” Indeed, simply adding avocado may confer no benefits to cholesterol at all.

So, yes, the avocado industry is right in saying that avocados are a more healthful substitute for butter, margarine, cheese, or cream cheese, but that’s a pretty low bar.

What Are the Worst Foods for High Cholesterol?

What Are Other Benefits of Eating Avocados?

Aside from being rich in phytosterols, what else can we get from avocados?

Within hours of eating a burger topped with half an avocado, the level of an inflammatory biomarker goes up in your blood—but not as high as it does if you eat the burger without the avocado. This may be because avocados and all other whole plant foods contain antioxidants, which decrease inflammation.

Rich in Nutrients for Eye Health

Avocados can also boost the absorption of carotenoid phytonutrients found in other vegetables. Why? Carotenoids, like beta-carotene, are fat-soluble.

For more on avocados, check out:

Why should we care about cholesterol? See, for example:

What should we shoot for? See Flashback Friday: Optimal Cholesterol Level.

To learn more about cholesterol-lowering foods, check out The Best Food for High Cholesterol and The Benefits of Kale and Cabbage for Cholesterol.

You may also be interested in Flashback Friday: Amla vs. Drugs for Cholesterol, Inflammation, and Blood-Thinning.

In addition to adding cholesterol-lowering foods, we need to reduce our intake of cholesterol-raising foods. See: