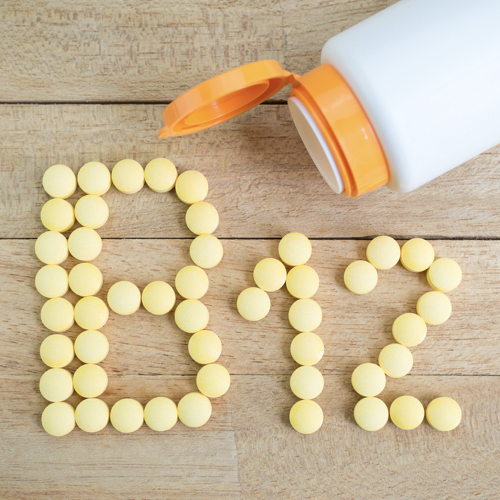 The results of vitamin B12 deficiency can be devastating. Learn more in our easy-to-understand videos on the latest research.

Vitamin B12 is not made by plants or animals but by microbes that blanket the earth. In today’s sanitized, modern world, the water supply is commonly chlorinated to kill off any bacteria. So, while we don’t get much B12 in the water anymore, we don’t get much cholera, either, which is a good thing!

A regular, reliable source of vitamin B12 is critical for anyone eating a plant-based diet. Though deficiency for those starting out with adequate stores may take years to develop, the results of B12 deficiency can be devastating, with cases reported of paralysis, psychosis, blindness, and even death. Newborn infants of mothers who eat a plant-based diet and who fail to supplement may develop deficiency much more rapidly with disastrous results. Getting enough vitamin B12 is absolutely nonnegotiable for those centering their diets around plant-based foods.

For adults under age 65, the easiest way to get B12 is to take at least one 2,000 mcg supplement each week or a daily dose of 50 mcg. Note that these doses are specific to cyanocobalamin, the preferred supplemental form of vitamin B12, as there is insufficient evidence to support the efficacy of the other forms, like methylcobalamin.

As we age, our ability to absorb vitamin B12 may decline. For those over 65 who eat plant-based diets, the supplementation should probably be increased up to 1,000 mcg of cyanocobalamin each day.

Instead of taking B12 supplements, it is possible to get sufficient amounts from B12-fortified foods, but we would have to eat three servings a day of foods each providing at least 190 percent of the Daily Value (on the Nutrition Facts label), with each serving eaten at least four to six hours after the last (based on the new labeling mandated to start January 1, 2020—the target is 4.5 mcg three times a day). For B12-fortified nutritional yeast, for example, two teaspoons three times a day may suffice. For most of us, though, it would probably be cheaper and more convenient to just take a supplement. Our fellow great apes get all the B12 they need eating bugs, dirt, and feces, but I’d suggest supplements instead!

Image Credit: NatchaS / Thinkstock. This image has been modified.

Popular Videos for Vitamin B12

The Best Type of Vitamin B12: Cyanocobalamin or Methylcobalamin?

For prevention and treatment of vitamin B12 deficiency, cyanocobalamin in chewable, sublingual, or liquid forms... 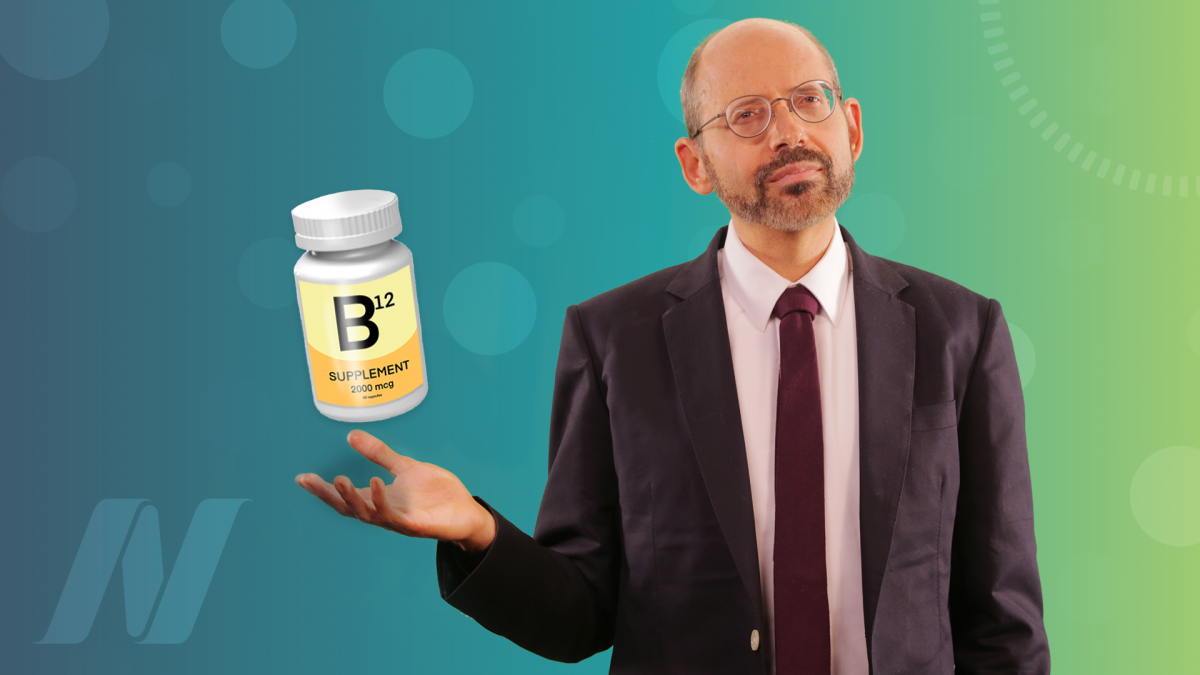 The Optimal Vitamin B12 Dosage for Adults

Why the current Recommended Daily Allowance for vitamin B12 may be insufficient. 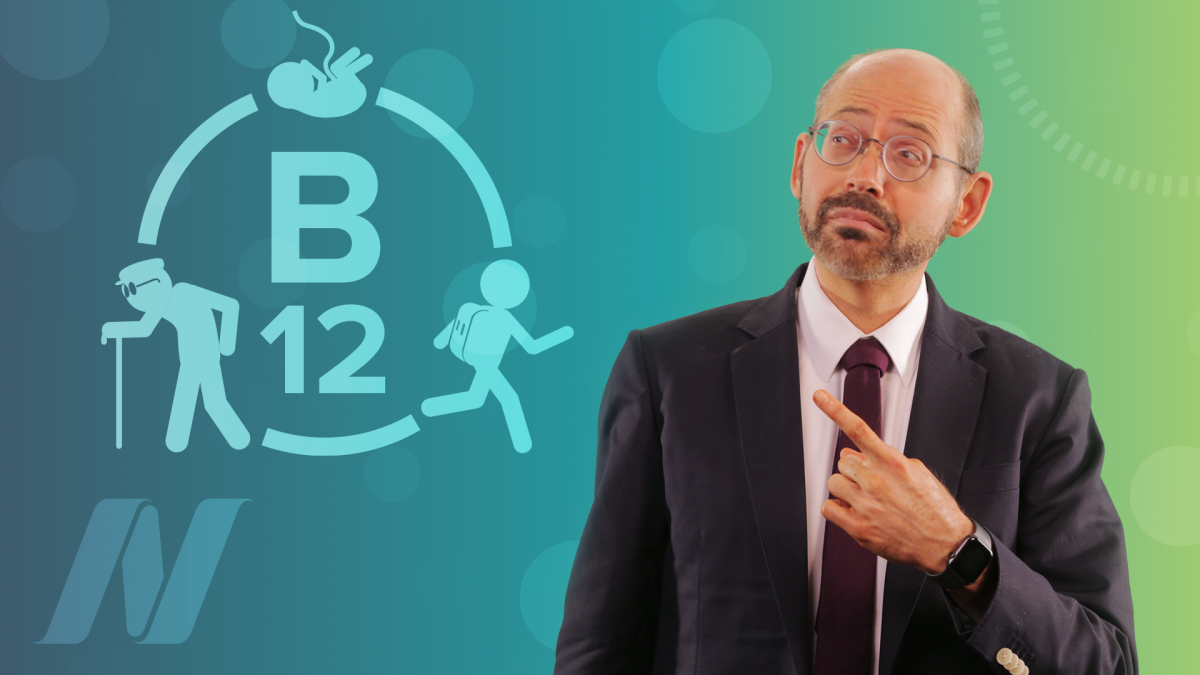 The Optimal Vitamin B12 Dosage for Kids, Pregnancy, and Seniors

At age 50, everyone, regardless of diet should start supplementing with B12-fortified foods or supplements... 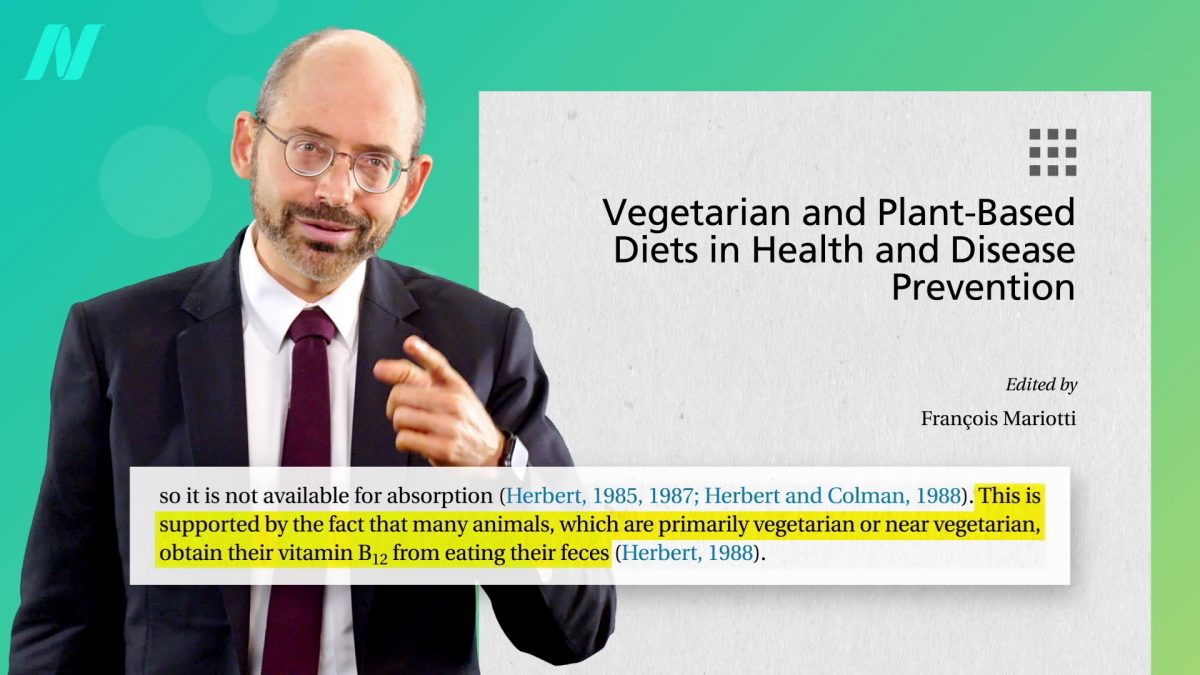 The Symptoms of Vitamin B12 Deficiency

B12 deficiency is known as “The Great Masquerader.” 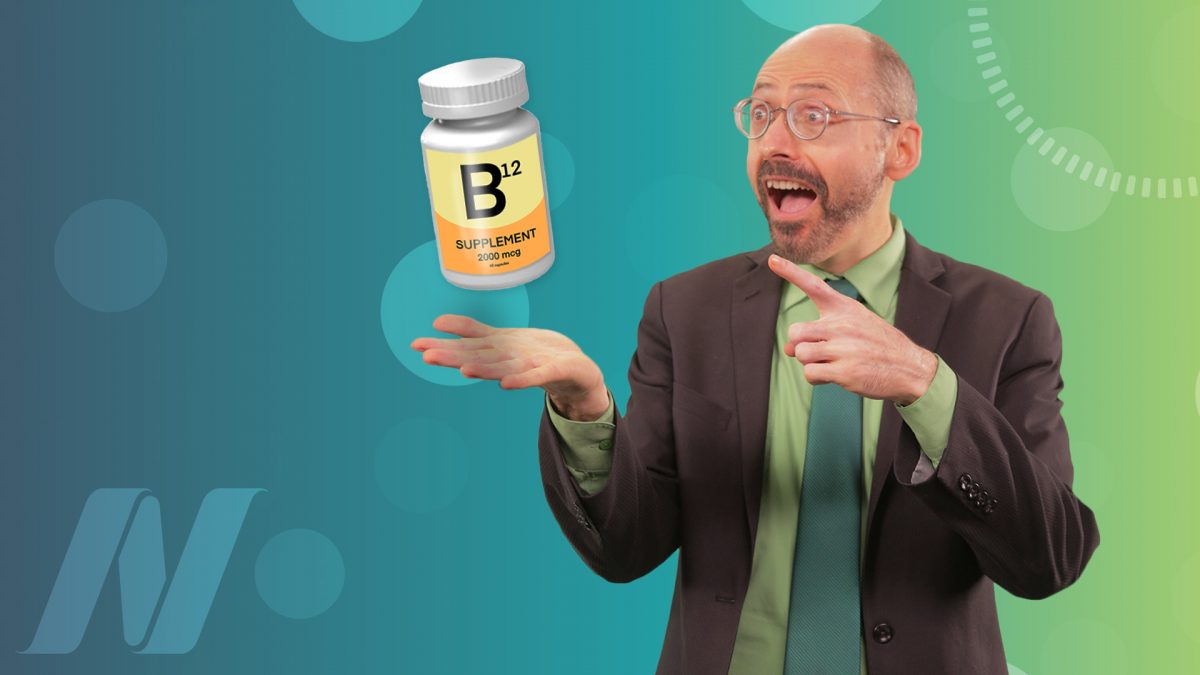 Not taking B12 supplements or regularly eating B12 fortified foods may explain the higher stroke...

How to Test for Functional Vitamin B12 Deficiency

Many doctors mistakenly rely on serum B12 levels in the blood to test for vitamin...

Vitamin B12 Necessary for Arterial Health

The cardiovascular benefits of plant-based diets may be severely undermined by vitamin B12 deficiency. 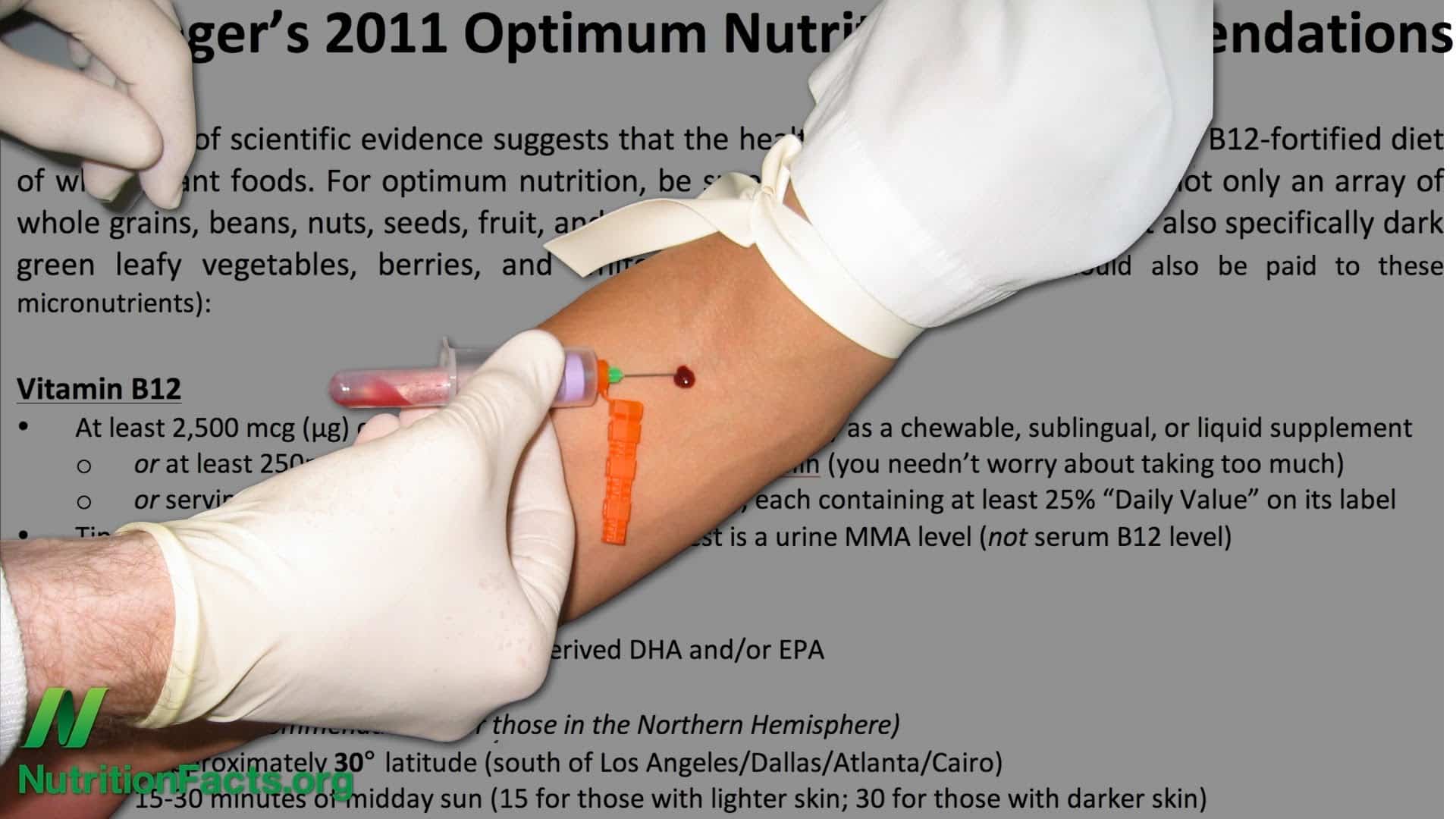 Who should get tested for vitamin B12 (cobalamin) deficiency, and which is the best test... 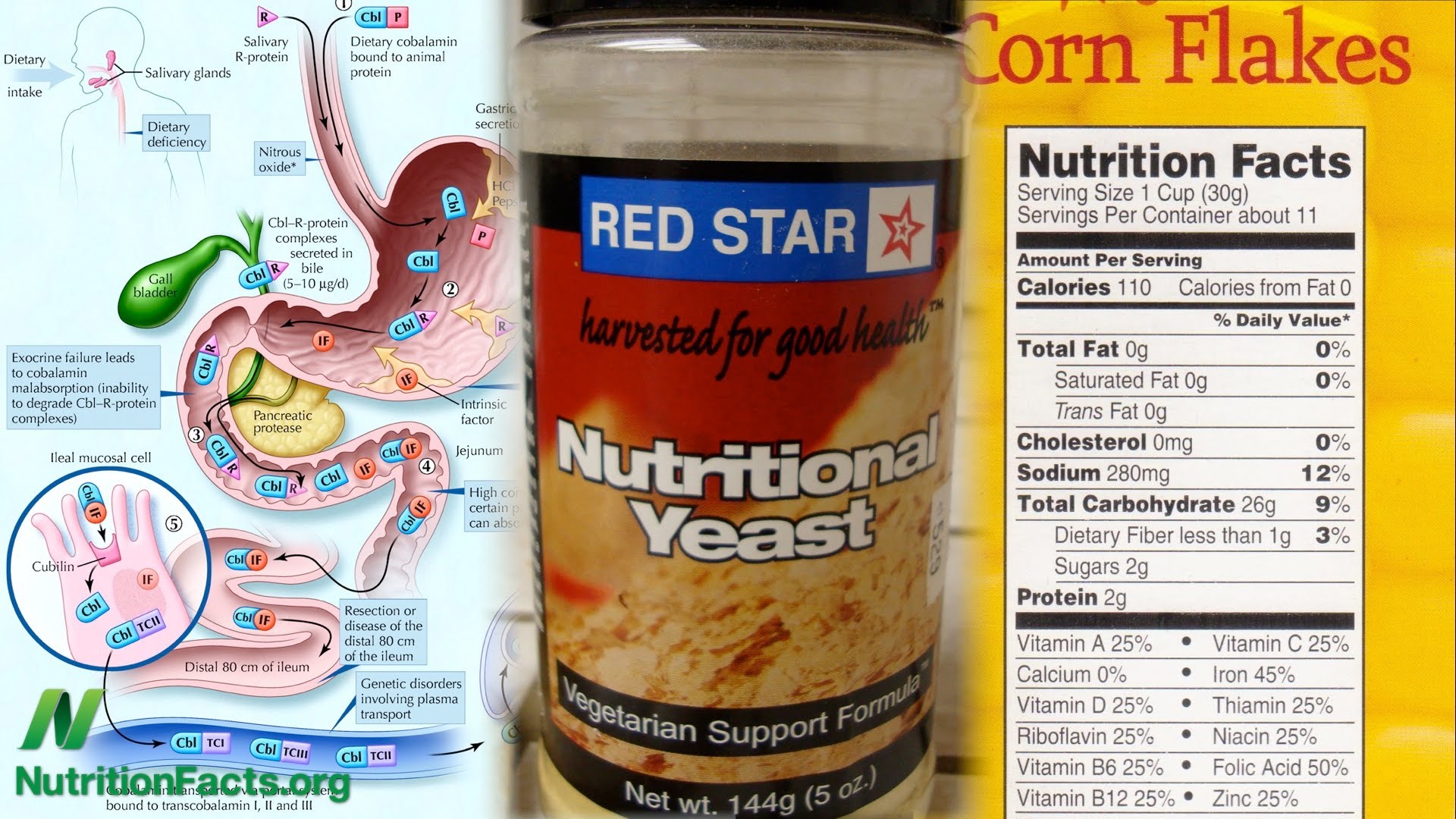 Daily Source of Vitamin B12

Fortified foods, such as some breakfast cereals and types of nutritional yeast, can provide another...

All Videos for Vitamin B12