When we eat foods with high concentrations of choline, a nutrient I discuss in more detail below, certain bacteria in our gut make trimethylamine, or TMA. Our system absorbs the compound, and our liver oxidizes it into TMAO. You can see a graphic illustrating this process below and at 2:19 in my video Egg Industry Response to Choline and TMAO.

Is TMAO Bad for You?

TMAO may be a key dietary component of an unhealthy diet that contributes to disease promotion.

Researchers at the Cleveland Clinic screened blood from patients who had either had a heart attack or a stroke and compared the results with those from the blood of people who had not experienced either. Using an array of different technologies, the researchers determined that the more TMAO people had in their blood, the greater the odds they had heart disease and the worse their heart disease was.

Four thousand people were followed for three years, and, as you can see in the graph below and at 3:10 in my video Egg Industry Response to Choline and TMAO, those with the highest TMAO levels went on to have significantly more heart attacks, strokes, or even death. 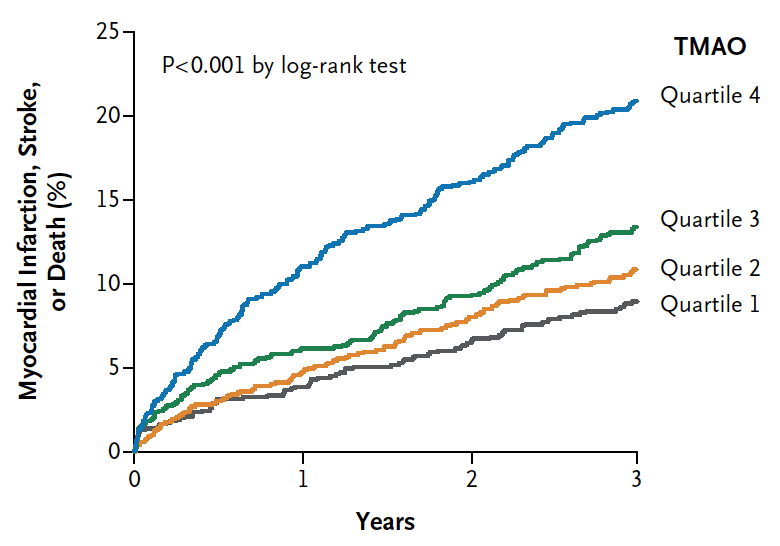 When researchers followed kidney patients over time and assessed their freedom from death, they found that those with higher TMAO lived significantly shorter lives, even after controlling for kidney function. See more at 4:44 in my video How to Treat Heart Failure and Kidney Failure with Diet.

We’ve known about the troublesome transformation from choline into trimethylamine (TMA) for more than 40 years, but that was long before we learned about its connection to heart disease. Why were researchers concerned nearly a half-century ago? Because these methylamines might form nitrosamines, which have cancer-causing activity.

In the Women’s Health Initiative study, women with the highest TMAO levels in their blood had approximately three times greater risk of rectal cancer, suggesting that TMAO levels may serve as a potential predictor of increased colorectal cancer risk.

Carnitine and choline are two components known to facilitate production of TMAO. Where do we get these in our diet?

Within 24 hours of consumption of carnitine, certain gut bacteria metabolize it into TMA, which our liver then oxidizes into the TMAO that then circulates throughout our bloodstream. Where can we find carnitine? It is concentrated in red meat, certain energy drinks, and carnitine supplements.

As mentioned above, our gut bacteria can turn choline into TMAO, too. Major dietary sources of choline are eggs, milk, and meat, including liver, poultry, shellfish, and fish.  Choline is also present in lecithin supplements.

Can We Reduce Our TMAO Levels?

TMAO is a toxic compound that may increase our risk of heart failure, kidney failure, and atherosclerosis, but might there be nutritional or interventional prospects for prevention? That’s the topic of my video How to Reduce Your TMAO Levels.

If our intestinal bacteria and liver can make TMAO from meat, dairy, and eggs, should we destroy our gut flora?

We could give people antibiotics to eliminate the production of TMAO, but that could also kill our good bacteria and foster the emergence of antibiotic-resistant bacterial strains.

What about probiotic supplements? If we add good bacteria, might they crowd out the bad bacteria? That doesn’t work. Adding good bacteria doesn’t seem to get rid of the bad.

What if we introduce new bacteria that could somehow siphon off the TMA made by the bad bacteria already in our gut? Well, there is a bacterium inside the guts of cows and sheep that turns trimethylamine into methane. Could we use that to get rid of some of the TMA in our gut? We could, but if it didn’t take, if our gut didn’t become colonized by the cow-and-sheep bacterium, we’d have to keep introducing it to our body. In that case, might the fact that Consumer Reports found fecal contamination in every sample of beef it tested be a good thing? Not at all. Methane-producing bacteria may be able to eat up our TMAO, but, unfortunately, these bacteria may be associated with a variety of diseases, from gum disease down to colorectal cancer, as you can see at 2:15 in my video.

If we can’t use antibiotics or probiotics to prevent our gut bacteria and liver from making TMAO out of the meat, dairy, and eggs we eat, should we cut down on our liver function?

That was the billion-dollar strategy employed by Big Pharma to lower our cholesterol. The same foods—meat, dairy, and eggs—raise our cholesterol, and changing our diet may lower it, but that isn’t very profitable. So, Big Pharma developed statin drugs that cripple the enzyme in our liver that makes cholesterol. Should we give that a try to lower our TMAO levels? Why not pharmacologically inhibit the enzymes in our liver that make TMAO and thereby possibly help reduce our risk of cardiovascular disease?

Trimethylaminuria is a genetic condition in which this enzyme is impaired naturally, so there is a build-up of trimethylamine in the bloodstream. The TMA just doesn’t get oxidized into TMAO. There is a problem, though. TMA is so stinky that it makes you smell like dead fish. So, “given the known adverse effects…from sufferers of fish odor syndrome, the untoward odorous side effects of inhibiting this enzyme make it a less attractive [drug] target.”

Do we have to choose between suffering from heart and kidney disease or smelling like dead fish? If only there were some other way we could stop this process from happening. There is. We could stop eating animal products, which is what those with trimethylaminuria often do to lower their TMA levels.

About a third of those who complain of bad body odor despite good personal hygiene test positive for the condition, but reducing or eliminating meat, egg, and dairy intake can be a real lifesaver. Given what we know about how toxic TMAO can be, cutting down on animal products may not just save the social lives of people with a rare genetic disorder, but it could help save everyone else’s actual lives.

Indeed, rather than trying to genetically engineer a bacterium that eats up trimethylamine or ingesting a gut enzyme from cows and sheep to convert it into methane, simply limiting the consumption of foods rich in choline and carnitine, perhaps specifically L-carnitine, may effectively limit the amount of TMAO circulating in our body. The easiest and safest recommendation? Eat more healthfully.

Our body makes all of the carnitine we need, so we can completely eliminate it from our diet. Choline, on the other hand, is an essential nutrient, so we do need some—but we don’t need to get it from eggs. Thankfully, we can get all we need from fruits, vegetables, beans, and nuts.

Can we get too much choline from plants? Do we need to worry about high-choline plant foods, like broccoli? No. In fact, consumption of cruciferous vegetables is associated with a significantly longer life and less cardiovascular disease mortality, as you can see at 5:34 in my video. To see what was going on, researchers took the vegetable highest in choline, brussels sprouts, and had people eat two cups a day for three weeks. What happened? Their TMAO levels actually went down. It turns out that brussels sprouts appear to naturally downregulate the TMAO liver enzyme—not enough to make you stinky, but just enough to drop TMAO.

People who eat completely plant-based may not make any TMAO at all—even if they try. You can give a vegan a steak, which contains both choline and carnitine, and there will not even be a bump in TMAO. Why not? Vegetarians and vegans have different gut microbial communities. If we don’t eat steak, then we don’t foster the growth of steak-eating bacteria in our gut. So, forget the cow. How about getting a fecal transplant from a vegan? From a TMAO standpoint, we may not have to eat like a vegan as long as we poop like one.

Can you sense my frustration as I read paper after paper proposing ridiculous  strategies for reducing or inhibiting TMAO production? Pills, supplements, and the like may be profitable for Big Pharma, but we already have a safe, simple, and side-effect-free solution: a plant-based diet.

And, plant-based eating gives us other benefits:

For more on TMAO, the smoking gun of diet-microbiome-disease interactions, see: