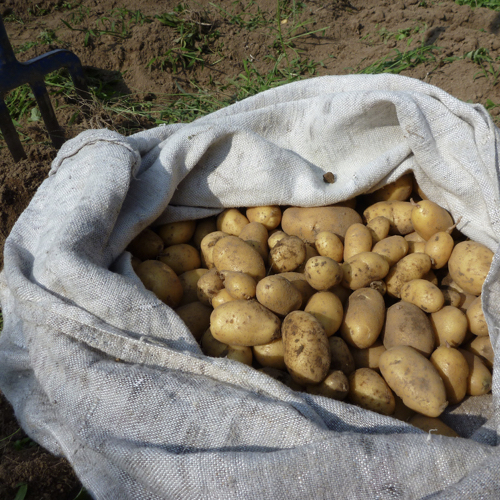 Americans eat a lot of pale and beige foods: white bread, white pasta, white potatoes, white rice. Colorful foods are often healthier because they contain antioxidant pigments, whether it’s the beta-carotene that makes carrots and sweet potatoes orange, the lycopene antioxidant pigment that makes tomatoes red, or the anthocyanin pigments that make blueberries blue. The colors are the antioxidants. That knowledge alone should revolutionize your stroll down the produce aisle.

Sweet potatoes are healthier than plain potatoes, but if you’re going to choose the latter, seek out those with blue or purple flesh. The consumption of one boiled purple potato a day for six weeks was found to significantly decrease inflammation, something neither white nor yellow potatoes were able to accomplish. The same was found for oxidation, but much faster. Within hours of consumption, purple potatoes increased the antioxidant capacity of study subjects’ bloodstream, whereas white potato starch appeared to actually have a pro-oxidant effect. Blue potatoes may have ten times more antioxidant power than regular white ones. The most exciting purple potato study to date had people with hypertension eat six to eight microwaved small purple potatoes a day, and they were able to significantly bring down their blood pressure levels within a month.

My Daily Dozen recommends two servings of vegetables a day. Given that the mammoth Global Burden of Disease Study identified the typical American diet as the primary cause of Americans’ death and disability and inadequate vegetable intake as our fifth-leading dietary risk factor, nearly as bad as our consumption of processed meat, don’t hesitate to enjoy purple potatoes, sweet potatoes, or the best of both worlds—purple sweet potatoes—as they’ll help you reach that daily minimum.

Image Credit: sethoscope / Flickr. This image has been modified.

All Videos for Potatoes